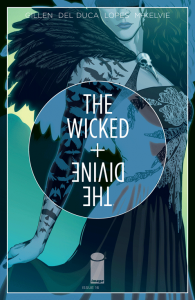 "Commercial Suicide", the third arc of The Wicked + the Divine, is rather aptly named. Each issue has focused on a different member of the Pantheon and utilised a different artist. One issue abandoned an original artist at all, and simply cut-and-pasted art from previous issues. It's all quite a challenging way to continue this ongoing urban fantasy, and my enjoyment of each issue has varied pretty wildly based on what I think of the art.

Issue #16 concentrates on the back story of Morrigan, a troubled goth who spontaneously ascended to godhood when the Pantheon returned. At present, however, she's trapped in a prison by Baal - another reborn god. One big surprise in this issue was how her past was so closely interrelated to Baphomet's. It's a well-crafted character piece, and fills in another section of the world of gods and monsters that writer Keiron Gillen has created.

While it does step away from advancing the series' core storyline, thankfully it also boasts some really strong artwork by Leila del Duca. I think the real star, however, is colourist Mat Lopes, who does a fine job differentiating between past and present, and representing emotional beats with subtle use of colour and tone. I do miss regular artist Jamie McKelvie - the book really doesn't seem the same without him - but as far as substitutes go Del Duca and Lopes are pretty great. (4/5)

Under the cut: reviews of  Hellbreak and Teenage Mutant Ninja Turtles.

Hellbreak follows a specialist strike force capable of entering into hell and either returning freed demons there or rescuing souls that have been sent there by mistake. It's a genuinely clever concept for an action/horror comic book, combining occult themes with military-style combat. This issue sees Father Lloyd having a crisis of confidence while the Orpheus team - deep in hell - run late in retrieving their latest soul. I'm particularly struck by the art in this issue by Brian Churilla. It's got a loose, exaggerated style that gives the whole book a sort of retro vibe. I feel it shouldn't match the material yet it's so well drawn that it actually kind of does. Gonzalo Duarte's soft colours are also a pleasant surprise, pulling back from any sort of garish appearance and letting Cullen Bunn's story and dialogue drive the issue along. (4/5)

In a market often starved of quality all-ages titles, IDW has been doing a great job publishing comic books based on the current Teenage Mutant Ninja Turtles TV series. It's a book with solid, usually self-contained stories simple and breezy enough for kids but packed with enough quality humour and dialogue to be an enjoyable read for adults as well. Sadly this issue is nowhere close to the quality I've come to expect. The main story doesn't even feature the Turtles at all, but rather the second half of a storyline with supporting characters. It's not particularly exciting either, and the artwork did not impress. The backup has much better artwork, but it's very brief and throwaway and fails to make up for the poor quality of the bulk of the book. (2/5)
Posted by Grant at 10:14 AM