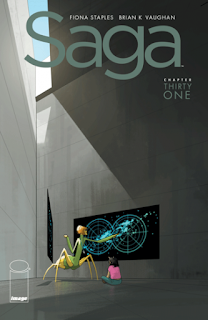 Saga fans the world over must be relieved to see that the comic's lengthy hiatus - it feels like the longest yet - is at an end, and another six issues are on their way. The first dropped into stores this week, and is a wonderfully entertaining book.

We pick up the story two years on from where we left it. Alana and Marko are nowhere to be seen. Hazel is now four years old, and living inside a prison with her incarcerated grandmother and a bunch of other children of various species. It's a striking change of pace, and signifies what might be a rather different story arc for the book. Don't get me wrong - the tone is the same, and Fiona Staples' artwork is stunning and distinctive as always. It just feels like we're getting a slightly different story for a while.

Two things leaped out immediately. Firstly it's great to have Izabel back. The bright-red ghost was one of my favourite elements in the series' earlier issues, and it feels like she's been gone for ages. Secondly, this feels like the point where Hazel is going to take centre stage as the protagonist of her own story. She's narrated it since issue #1, but until now has been too young to really affect or drive the plot in any great way. It feels like that has started to change.

This is a great series, and will it's had its ups and down like most long-running books, it feels as if it's in a very strong, enjoyable space for now. It's great to have it back. (5/5)

Tim and Jason continue their investigations. Cass and Harper face off against an army of hypnotised knife-wieldng ballet dancers. Dick comes face to face with the elusive "Mother", whose mysterious past with Batman set off the whole adventure. This is a rock-solid climax to the story's first act, revealing the villain and setting up the narrative thrust for the remaining 16 issues. The action is well delivered and dramatic, and the accompanying drama is wonderfully intriguing. This is, thus far, a much better weekly than its haphazard predecessor. Fingers crossed it continues that way. (4/5)

"Vader Down", Marvel's first Star Wars crossover storyline, continues in this issue. Darth Vader has crashed his TIE fighter after an altercation with the rebel fleet. Now he's alone against several dozen rebel soldiers. Elsewhere on the planet, Luke Skywalker has also crashed - and he's getting stalked by Vader's archaelogist employee Dr Aphra. This feels a lot more entertaining than last week's instalment. More happens, characters interact better, and the terrifying scale of Vader's dark side powers become apparent. It's great stuff. Gillen also finally gets the chance to write for Han, Luke and Leia, and he captures them perfectly - as does Salvador Larroca with his excellent artwork. (4/5)

The debut story arc comes to a close with a few surprises, and a lot of excellent set-up for the series going ahead. Patrick Gleason clearly learned a lot from Peter J. Tomasi back on Batman and Robin, because he's absolutely nailed that series' presentation of Damian Wayne. This issue shows multiple facets of Damian's character from the funny to the inspiring to the heartbreaking. It also re-sets Talia al Ghul as a potential villain going forward, and sets up Damian as a solo hero for the time being. I was worried when this series started that it wasn't going to match up to its predecessor. Now I think it's hit its groove, and looks set to do just fine. (4/5)

After a lengthy delay, this volume of Silver Surfer finally comes to a close. I suspect the delay has a lot to do with the delays over at Secret Wars, Marvel's massive universe-rebooting epic miniseries. At any rate it's here now, and has the artwork one has come to expect from the constantly excellent Michael Allred, and a conclusion by Dan Slott that's a little disappointing but does its job. There's a little too much of heroes and villains proclaiming things at one another this issue - I miss the whimsy and the humour of earlier issues. A new volume starts in January with the same creative team - I look forward to it. (3/5)
Posted by Grant at 7:50 AM