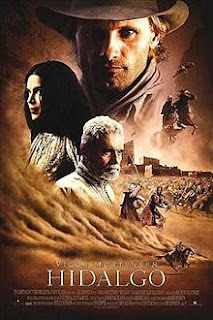 Frank T. Hopkins (Viggo Mortensen) is a washed-up distance rider working in Buffalo Bill's Wild West Show. When he is visited by representatives of the Sheikh Riyadh (Omar Shariff) he is offered the chance to enter the "Ocean of Fire" - a 3,000 mile endurance horse race across the Middle East. To win the race he must overcome fierce rivals and bandits, anti-western bigotry, sabotage and the relentless heat of the Najd desert region.

Hidalgo is a sweeping adventure film inspired by Frank T. Hopkin's unpublished account of a long distance race he claimed to have won in the Middle East. Of course no such race likely existed, and much of Hopkins' claims have long since been discredited by historians. As a result Hidalgo is one of those tenuous Hollywood films claiming to be 'based on a true story' while simultaneously embellishing itself to such a degree that the term has very little meaning. The film is directed by Joe Johnston, who appears to have made a long career out of making films that are almost good. Jumanji (1995) had potential but suffered from a saccharine screenplay and over-ambitious CGI animals. Jurassic Park III (2001) had a lot of fun scenes but lacked a third act. Captain America: The First Avenger (2011) was a knockout in terms of casting but a crushing disappointment in terms of actual story. Of his ten feature films as director I'd personally rank The Rocketeer and October Sky as his best works. I wouldn't rank Hidalgo - although as with all of his lesser films it does still have plenty to recommend.

Viggo Mortensen is an actor with a remarkable screen presence, as is Omar Shariff. Whenever they share a scene it's automatically interesting. Mortensen himself has a wonderful sort of old school movie charm, as if he's starring in movies about 40 years too late. He actually helps make a lot of the film feel more dramatic than it is. Unfortunately it's not as dramatic as it needs to be. The film takes an interminable time to actually get going, and once the race begins the real thrills are few and far between. It is - to steal one of Roger Ebert's more famous quips - a 90 minute movie squeezed into 130 minutes.

It also cannot avoid the enormous problem of a white American travelling to the Middle East to beat a group of Arabs at their own race. The film is dreadfully post-colonial. Numerous opportunities are taken to demonstrate that the people of the Middle East are primitive, superstitious and barbaric. Similar opportunities are taken to show off Hopkins as smarter, more innovative, faster and more effective in a fight. Meanwhile, an English horse breeder named Lady Davenport (Louise Lombard) shows herself to be imperialist, corrupt and evil - just like the British always are in the lazier kinds of American action films. It gets worse: Hopkins is half-Lakota Sioux, providing him with a mystical edge of his own that's positioned as superior to the Muslims in the film. He gains all the advantage of Native American culture without actually having to be a Native American himself. Mortensen, of Danish descent, couldn't look less indigenous to the Americas if he tried.

When the film does pick up, it's great. Hopkins' rescue of the Sheikh's daughter in a frontier settlement is well shot and edited, as is a climactic horse chase across a pit trap-filled mudflat. Johnston visibly knows how to shoot and edit an action sequence. It's just a shame that the script he is working from is so outdated and old-fashioned. There are no surprises here: no twists or turns, no sudden changes in narrative direction. Hidalgo does precisely what it says it does, just predictably, post-colonially and slowly.
Posted by Grant at 7:18 AM