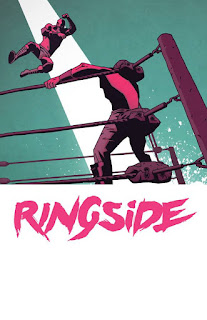 Professional wrestling is such a wonderful backdrop for drama that it's amazing it's been used so rarely. Darren Aronofsky famous used it as the basis for his award-winning film The Wrestler, but there's been no wrestling-based TV drama to date and until this week no real attempt to use the sport in a monthly comic book.

Ringside, then, has a great foundation to it. The book follows a former pro wrestler, Dan Knossos, who rushes home to California from Japan on an urgent - but as-yet undisclosed - mission. It's a canny mixture of wrestling drama and crime story, and this cleverly plotted first issue gives the reader just enough of both. Personally I'm gripped, and can't wait to read what happens in the next few issues. If writer Joe Keatinge is smart, and this book gives every indication that he is, then this is going to be a great mixture of gritty crime with a behind-the-scenes showcase of just how the wrestling industry works.

Nick Barber's art is beautifully sparse, using one pen stroke where a less confident artist would use five. It gives the book a nicely stripped-down look, a look helped in no small measure by Simon Gough's faded colours.

There's a huge amount of promise in this book. I'm really keen to see it develop. (4/5)

Under the cut:reviews of Chewbacca, The Fuse and We Are Robin.

Zarro and Chewbacca race to the spaceport to get help against the crime lord Jaum - only to run headlong into a squadron of Imperial troops. This issue is a brilliant blend of action and comedy. Much like Kieron Gillen has nailed what it is that's appealing about Darth Vader for his monthly coming, here Gerry Duggan writes the perfect outlet for Chewbacca: he's smart, large and violent, and nobody understands what he's saying. This has been an incredibly fun miniseries, helped in no small part by Phil Noto's gorgeous artwork. I really like the way Marvel are using these miniseries to highlight different characters. First Leia, then Lando. After Chewbacca, we're getting five issues of Obi-Wan and Anakin. The possibilities are, for a Star Wars geek, very exciting. (4/5)

With the perihelion party winding down, Klem and Ralph have to deal with a suspicious death, the possible resurfacing of a serial killer, and a hostage situation that may involve a local crime boss. This third story arc has such a different feel to its two predecessors. They were both excellently plotted police mystery stories, whereas this is a much more complex mess of procedural stories woven in together. It makes for a more varied story, but also much more complicated one to follow. What makes it work is how the tone of The Fuse, combined with its excellently developed characters, sustains the reader through multiple stories at the same time. (4/5)

Another of DC's recent launches hits the end of its first arc, giving readers a chance to take a step back and assess how the series is going so far. To be honest, this one is feeling pretty uneven. On the one hand it's working from a great concept of Gotham City's teenagers grouping together, putting together their own costumes and taking to the streets to fight crime. On the other hand it's a pretty messy and unfocused story. Asides from protagonist Duke - who was already introduced in Batman - I'm struggling to remember who each of the regular cast is. If I can't remember them, I can't properly engage with them, and if that process fails then no amount of clever concepts is going to make the book work. Future issues really need to take pause and make readers care about who these kids are. (2/5)
Posted by Grant at 10:47 PM