The Omega Factor: "Out of Body, Out of Mind" 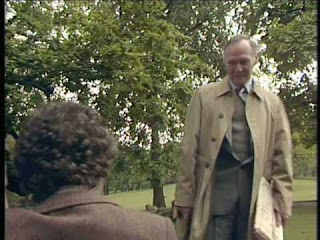 Tom Crane (James Hazeldine) notices strange sleeping behaviour by his brother Michael (Nicholas Coppin), who claims to be having inexplicable out of body experiences. It all seems to match research being undertaken by Martindale (John Carlyle) at Department 7, which leads Tom to suspect that Martindale is not being honest with him.

After a shaky episode in "St Anthony's Fire", The Omega Factor returns to the sort of high quality paranormal thrillers that made it so distinctive. In this case it's a combination of out-of-body experiences and a sort of Manchurian Candidate thriller, as Tom races to prevent the assassination of an African Prime Minister.

Anthony Read does a great job with the script for this episode, achieving exactly the sort of small-scale and big-concept drama that the BBC used to do so well. The budget is no bigger than usual, and mostly comprises people talking in rooms. Despite these limitations Read crafts a story in which Tom uncovers an assassination plot that uses psychic projection and brainwashing, as well as international espionage, African politics and the ever-growing threat of the mysterious Omega organisation. So convinced is Tom that Omega exists, not to mention suspicious of Martindale's motives, that he finally makes the journey to London to go over Martindale's head and speak to Andrew Scott-Erskine (Brown Derby) directly.

The series is doing a great job with Tom's suspicions over Martindale's motives - here we are, only two episodes away from the season finale, and it could easily go either way. The paranoia has been upped regularly, and this time around it's particularly exacerbated by the revelation that Martindale kept Michael's participations in his experiments a secret from Tom. The romantic relationship between Tom and Anne (Louise Jameson) is also developing nicely.

By episode's end the stakes feel nicely raised, and a renewed sense of purpose added to the series. It's another great episode, making that five good ones out of eight so far. The quality ratio rises back to 63 per cent.
Posted by Grant at 5:05 PM