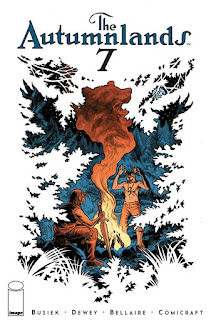 The Autumnlands is a fantastic fantasy comic book, and if you're a fan of fantasy and a comic book enthusiast, you should already be reading it. In case you aren't: the series is set in a world of anthropomorphic animals (they walk and talk like humans), where rich and powerful wizards rule the world from great floating cities. Magic is fading away, however, so a group of powerful magicians attempted to pool their skills and bring back the mythical "Great Champion". They manage this, but (a) it takes so much power that their floating city crashes to the ground, and (b) the champion appears to be a human from a high-technology civilization some time in the ancient past.

Issue #7 picks up with the surviving magicians getting rescued and starting blame games, while the Champion and the dog apprentice Dusty are on the run cross-country from a vengeful bison chief. Everything I liked about the first six issues is back: great writing by Kurt Busiek, a wonderful literary quality to the narration and the introductions, and beautiful artwork by Benjamin Dewey. Dewey has an unusual style for a comic book: it's the sort of thing you more often see in an illustrated novel, and that adds to the literary quality.

The first collected volume is available now, so between that and this issue you'll be completely up to date. It's a marvellous comic. (5/5)

Under the cut: reviews of Batman and Robin Eternal, Descender and Rebels.

Issue #6 of DC's latest weekly comic is largely a flashback to a time when Dick Grayson stood alongside Batman as Robin. It's a wonderfully nostalgic experience for the most part - one that gets punctured by a genuinely creepy revelation about the mysterious "Mother" that seems to have all the former Robins targeted for destruction. The issue ends with Dick, Jason Todd, Harper and Cassandra off together to Prague, which is a pretty great hook for a series. If you're a fan of Batman's sidekicks, this book is exactly what you need. Tony Daniel provides artwork for this issue as well, which is a good thing: he's one of my favourite Batman artists ever. (4/5)

In a future civilization where a widespread disaster saw all robots banned, Tim-21 is a boy robot being kidnapped by one group after another, as everyone rushes to find the information purportedly locked inside his head that could prevent the disaster from happening again. I'm not 100 per cent sure what it is about Descender: the script is strong, Nguyen's artwork is good, yet I always feel as if I'm one half-step away from being properly engaged. I've yet to put my finger on what it is: it's a very good comic that feels like it should be a great one. (3/5)

Brian Wood's American Revolution anthology continues. This issue's main storyline follows Silence Bright, a woman of mixed heritage using her print shop to produce anti-British propaganda. A back-up story returns us to Seth Abbott, with an incident that takes place in the middle of his earlier story arc. Both are well written with strong artwork, and a masterful sense of period detail, At the same time, both feel oddly slight - as if either one could have easily filled 22 pages of story without needing a back-up. I'm interested to see if either storyline continues next issue, because they both feel pretty open-ended. (3/5)
Posted by Grant at 7:09 PM