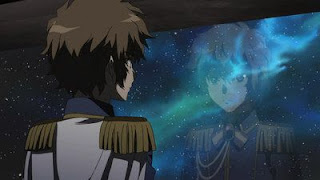 It's 21 April 2012, and time for another episode of Bodacious Space Pirates.

Their initial teething troubles behind them, the temporary crew of the Bentenmaru pirate shop begins preparations to storm the pleasure cruiser Princess Apricot. Yacht club president Lynn appears to have something on her mind, and when she's spied secretly communicating to somebody off-shop it sets off Grunhilde's suspicions.

Something that's been bugging me about Bodacious Space Pirates for the whole series has finally slipped into clarity: there's no conflict. Conflict is the basis for drama: it's either a person against another person or a person against their environment. It's arguable that the conflict in Bodacious Space Pirates is between the characters and their own self-doubt, but assuming that to be the case it's a pretty thin foundation upon which to build a story.

Star Trek: The Next Generation often found the same problem, since it's entire regular cast all seemed to get along. The solution there was to bring in a constant stream of regular antagonists for them to fight, and that isn't what happens here. Even if somebody is in an adversarial role, they usually switch over or get their point of view expressed within an episode - often by the time the episode is out. I suspect this kind of playful, stress-free ambience will appeal to a lot of anime viewers - I'm just not entirely certain it appeals to me. I love the characters of this show, and I do love the tone and the humour of it, but I struggle to overcome the slow pace and the overwhelming sense that it's all harmless fun.

Harmless fun is certainly how the pleasure cruise passengers treat the invading pirates. There's a wonderfully strange relationship in this series between pirates and their victims: formally contracted, and fully insured, it's become a sort of cabaret entertainment for the rich. They're happy to give away their valuables because they find it all so entertaining. There's something rather Douglas Adams-esque about that: it's a logical solution pushed to a nonsensical extreme. In this case the yacht club's first attempt at piracy is pretty adorable. Without pirate outfits they resort to storming the ship in cosplay.

That's the problem with Bodacious Space Pirates. It's all so charming and amiable that criticising it feels somewhat akin to kicking a puppy. I had by doubts about this episode, but it's cosplay pirate climax won be over. That makes 12 good episodes out of 16, and a quality ratio of 75 per cent.
Posted by Grant at 7:26 AM