Star Trek: The Next Generation: "Reunion" 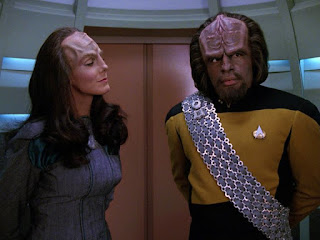 It's 5 November 1990, and time for more Star Trek: The Next Generation.

K'mpec (Charles Cooper), Chancellor of the Klingon Empire, is dying. He knows he has been poisoned by one of the two rivals for his throne: the upstart Gowron (Robert O'Reilly) or the treacherous Duras (Patrick Massett). To ensure an honourable succession he appoints a reluctant Picard (Patrick Stewart) to oversee the selection process. Meanwhile Ambassador K'ehleyr (Suzie Plakson) returns to the Enterprise with a surprise for Worf (Michael Dorn): their son.

"Reunion" is a fairly momentous episode of Star Trek: The Next Generation. It pushes the Klingon story arc that began in "Sins of the Father" into a surprising new stage, and sets the scene for the forthcoming Season 4 finale. It's an episode with remarkable repercussions for Worf, giving him a young son named Alexander. While the episode's end would appear to conveniently sweep the character out of frame, he does return in a fairly prominent way in the future.

Let's examine the Klingon succession first: it initially seems like a ridiculous plot development for the dying Chancellor to appoint Picard as the grandly titled Arbiter of Succession. Certainly Picard looks suitably horrified when K'mpec tells him of his appointment. It's a beautifully played scene between Charles Cooper and Patrick Stewart, full of genuine gravitas and portent. Jonathan Frakes directed the episode, and it's the best one he's directed so far. There are scenes - and this one's a key example - where it really does look less like television and more like cinema. That division isn't really there in American television any more, but back in 1990 it's a striking contrast.

Patrick Massett returns as Duras, playing the role in much the same way he did in "Sins of the Father": all shouting and bluster, and untrustworthy sneering. The real stand-out is Robert O'Reilly as the bug-eyed and hilariously over-the-top Gowron. I do wonder if, when making this episode, anybody realised just how long Gowron was going to stick around: he returns for another 10 episodes over the next nine years.

Weirdly the episode begins with K'mpec confirming to Picard that one of the two candidates has had him poisoned. He dies shortly afterwards. The episode never actually gets around to revealing whether it was Duras or Gowron that did it. The implication is that it was Duras: in a later scene one of his soldiers undertakes a suicide bombing in an attempt to kill Gowron, and we subsequently learn that Duras is working with the Romulans. For some reason I've always suspected it was Gowron who did the poisoning.

Future episodes of both The Next Generation and Deep Space Nine practically wallow in Klingon-centric storylines, but back here it's still a relative novelty. It's all highly entertaining stuff, made all the more personal and relevant by Worf's personal connection to it. It's a bit of a rollercoaster for poor Worf this episode. He discovers he has a son, he rekindles his relationship with K'ehleyr and just when it looks like he might get what he wants Duras brutally murders K'ehleyr in her quarters.

By this stage we've watched about 80 episodes of The Next Generation, so it seems pretty obvious what's going to happen. Worf is going to struggle with his duty as a Starfleet officer versus his honour as a Klingon, and will want to kill Duras in revenge, but will ultimately stand solidly by while Duras gets killed in some other fashion. That's what we expect, but what he get is Worf storming from K'Ehleyr's still warm corpse to his own quarters, grabbing a bladed weapon, beaming over to Duras' starship and stabbing the weapon a full six inches into his chest. It makes perfect sense. It's remarkably satisfying to see. At the same time it's also incredibly unexpected, because pre-meditated violent murder is simply not something that Star Trek characters do. The episode treats these events seriously and with respect. Worf gets a formal reprimand on his service record and a very cold talking-to by Captain Picard - another one of the episode's particularly strong scenes.

Narratively it's rather neat, because of course it simultaneously seals off one storyline with tragedy and seals off the other through victory. Duras is dead and gone, and doesn't get to become Chancellor. Gowron wins by default. We don't see him ascend to the Chancellorship because the episode's writers (and there are five of them) wisely realise we care more about Worf than we do about Klingon politics. The episode ends with him accepting and embracing his son.

Alexander's an odd character. Now granted we have never before seen the manner and speed at which Klingons mature, but in his first appearance here he looks about four even though he was only born about 15 months earlier. When he returns in Season 5 he looks about nine but is only two-and-a-half, and by Deep Space Nine's time he's about eight years old and serving on a Klingon battleship. True it could be that Klingons mature much faster than humans do, but it never gets mentioned and does look suspiciously like the rapid-aging syndrome often seen among the children of soap opera characters.

Worf's relationship with Alexander is great here. It begins so awkwardly, but by the episode's mid-point Worf is already enthusiastically introducing him to Klingon culture. At one stage Alexander tries to play with his father's bat'leth - a sort of curved double-sword that makes its debut here. A responsible human father would warn the child away from playing with a dangerous weapon. Worf, as a good Klingon father, explains what it is and starts to instruct his son on its use. When Alexander and Worf discover K'Ehleyr dying and covered in her own blood, Worf instructs his son to gaze upon her body so that he knows and understands what death is. It's brilliantly written, because it's clearly responsible parenting for a very distinctive alien culture.

It is genuinely sad to see K'Ehleyr go, not just because her demise comes at such an awful moment in her and Worf's lives but because she's one of The Next Generation's best guest characters. Suzie Plakson plays the role in such a relaxed, wry fashion. It's great to see her trade barbs with Gowron, or flirt with Worf, or explain Klingon politics with Picard. She's a smart, canny and rather funny character, and it's a shame we only got to see her in just two episodes.

This is an exceptional episode. It brings the season tally up to five good episodes out of seven. The quality ratio rises up to 71 per cent.

A small point of Trek history. In addition to introducing Gowron and the bat'leth to the Star Trek universe, this episode also marks the debut of writer Brannon Braga. He will go on to write or co-write another 19 episodes of The Next Generation - including its series finale, and 49 episodes of Star Trek: Voyager, co-create Enterprise and co-write the screenplays of Star Trek: Generations and Star Trek: First Contact.
Posted by Grant at 4:59 PM