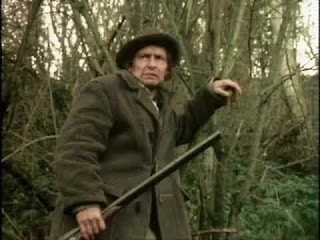 Now travelling together, Abby (Carolyn Seymour), Greg (Ian McCullough) and Jenny (Lucy Fleming) set about finding a permanent home base and sourcing supplies. When they find a well-stocked and abandoned supermarket, they think their problems are solved - until they're confronted by an armed militia working on the orders of regional despot Arthur Wormley.

It's a relief to see the Wormley plot thread set up in the second episode actually get carried over to the third, with a small posse of gunmen led by Wormley's violent-minded lieutenant Dave Long (Brian Peck). There's a really effective sense of tension in these episodes: each time the protagonists encounter somebody new the paranoia ratchets up. Are they friendly? Hostile? Are their intentions open and honest? Will they betray the heroes at the first step? It's been running like this for three episodes running and shows no sign of letting up.

It's a great episode for Carolyn Seymour, who does a superb job of playing Abby as a three-dimensional, complex character. She's already gravitating towards a leadership position, but when Jenny not only points this out but supports it Abby suffers an immediate crisis of confidence. She's a strong woman, yet still has to stop the car and run away to cry after their first encounter with Dave Long and his men. Terry Nation's scripts do a great job of reminding us that she may be a strong character, but she's also a privileged housewife completely out of her depth.

Less impressive is Talfryn Thomas as the Welsh tramp Tom Price. It's probably not Thomas' fault, although he plays the role in the most ridiculously broad fashion. The real problem is unfortunately Nation's writing. Price is written as a horrible negative stereotype of the Welsh. In the 1970s the BBC did a enthusiastic job of either ignoring the Welsh entirely, portraying them as dour miners down a pit (see Doctor Who's "The Green Death"), or good-for-nothing thieves and skivers. Price is the latter of these portrayals, and receives no complexity or depth - just a constantly irritating untrustworthiness. I feel sorry for Thomas for having to play such an awful part. At the end of the episode he leaves to join Wormley's men. I have a sinking feeling we're going to see him again.

In an early scene Tom encounters a man and a boy living in a shack in the woods. Both are sick from something - not the virus - and Tom leaves them be. When he mentions the encounter in conversation to Greg, it leads Greg, Abby and Jenny back to the shack - the child might be Abby's missing son. This leads to the episode's darkest moment: the man and boy are dead, and Abby has to enter the shack to confirm whether or not one of the corpses is her own son. It's terrible depressing stuff, but written and performed in a wonderful effective fashion. This series is at its best when it's at its bleakest, and this was a particularly strong scene.

My memory of Survivors is of it being a fairly ponderous rural soap opera with post-apocalyptic references around the edges. If it does become that, it's taking its time. Three episodes in, and it's as bleak and effective as I could want it to be. The quality ratio, for now, is way up at 100 per cent.
Posted by Grant at 9:00 PM