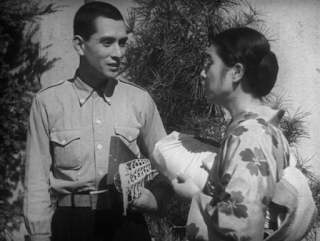 As the Pacific War goes on, the Japanese government orders that the residents of a quiet Tokyo street be relocated to accommodate the war effort. As the various residents prepare to leave, they experience their various regrets and face up to their unspoken desires.

That's the basic gist of Jubilation Street, a 1944 Japanese propaganda picture directed by Keisuke Kinoshita. It's a relatively short film, running a tidy 73 minutes, but it's also an incredibly leaden and melancholic one, which has a tendency to make the film feel an awful lot longer than it actually is. As far as propaganda movies go it's rather unusual. While it does ostensibly tell a story about how people should move out of the military's war for the war effort, and sacrifice anything they can to prevent an American victory, it also makes no secret that war-time Japan is a pretty depressing place, and that people will die, and that all the plans you hope for in your life mean nothing if the government spontaneously decides to take them away.

Kinoshita, like most Japanese directors of the mid-20th century, rose up slowly through the ranks of the studio system - first as a junior production member, then as an assistant director, and finally as a fully-fledged director in one own's right. It took a decade for Kinoshita to make the jump to directing, and by that point World War II was in full swing. His employer, Shochiku, was under orders to make uplifting propaganda movies to aid the war effort. As a result, pretty much all of Kinoshita's films were supposed to have positive war-time messages. For whatever reason - pacifist objection, anti-Imperialist sentiment, or maybe just a sense of good drama - Kinoshita was remarkably poor at giving his films happy endings or pro-war messages. Instead he seemed to wind up dwelling gently on how sad it all was for families. That's certainly the case here in Jubilation Street, and his ending to Army (also in 1944) was so offensive to war-time censors that he was accused of treason and forbidden to ever direct again. Thankfully Kinoshita lasted longer than the military government did: he started directing again in 1946, and made another 46 films before dying in 1998. His most famous films are Twenty-Four Eyes and The Ballad of Narayama.

All that in mind, Jubilation Street feels like a rather brave movie that gently but provocatively challenges the government's notion that the Japanese people should all be proud and happy to be at war. It's just a pity that it's so leaden. Despite some occasionally nice moving camera work, the film has a slightly stodgy and awkward feeling. There are constant and unnatural pauses during dialogue scenes. This is the earliest of Kinoshita's films I've seen, so I know that his skills and techniques improve immeasurably, but as for this film in particular I have to admit it really didn't grab me. I've been watching a lot of pre-1950 Japanese cinema in the last year or two, and this was the first one that I found a chore to finish.

The film is available in a Criterion Collection boxed set, along with four other early examples of Kinoshita's work. After a break I might head back and sample another, just to find out how representative of his early career Jubilation Street is.
Posted by Grant at 7:24 AM