The White-Haired Witch of Lunar Kingdom (2014) 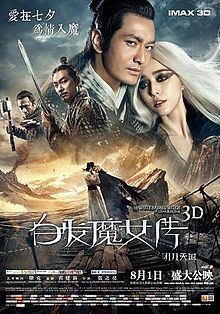 Baifa Monu Zhuan, variously translated as Biography of the White-Haired Succuba or Romance of the White-Haired Maiden, is a serialised Chinese novel by Liang Yusheng. It was enormously popular when originally published in 1957. Within two years it had already been adapted into a Hong Kong wuxia film, Story of White-Haired Demon Girl. A television adaptation appeared in 1978, another film in 1980, and another TV serial in 1986. In 1993 the novel received its most famous and still most widely acclaimed adaptation, Ronny Yu's phenomenally successful The Bride with White Hair. His film stripped out the majority of the novel's plot - the political machinations, the civil war, the rival clans of nobles and bandits - to concentrate primarily on its central tragic love story. He also cast Hong Kong film legends Brigitte Lin and Leslie Cheung, which never hurts.

Last year the novel got yet another adaptation - its 10th including film and television - in the form of Jacob Cheung's lavish CGI-filled epic The White-Haired Witch of Lunar Kingdom. The film stars Huang Xiaoming as the dashing warrior Zhuo Yihang and Fan Bingbing as the bandit queen Lian Nishang, destined to become the white-haired witch of the title.

The film is, sadly, a pretty frustrating one. It chooses to retain much of the novel's broader narrative, which likely works fairly well for audiences already familiar with the original story. For everyone else it's a confusing mess of bearded men in varieties of armour conspiring against one another. The central love affair that provided so much elegant, mournful drama in The Bride with White Hair has been contracted down to a short section in the middle of the film. The tragic elements that made Yu's film so memorable are essentially side-lined here, right up to the film's climax where they suddenly make a half-hearted return.

It's simply all so rushed. There's too much plot to work through for any individual plot strand to be given time to breathe. Scenes instead work by archetype: the scene with the conspiring eunuch, then the scene with the playful sword fight between future lovers, then the bearded men looking over a map of their territory. It feels an awful lot like six other wuxia films all mixed together in a blender.

It hurts the characters, and presents an enormous struggle for the actors. Huang Ziaoming has to go from serious swordsman to lovestruck Romeo to dejected prisoner to political animal to revolutionary, all in the scope of two hours. There's simply no time to convince the audience that his character has any depth at all. It's the same for pretty much every character. The film doesn't attempt to earn its emotions. The result is a fairly hollow experience.

Hollow but pretty: there is some beautiful costume design in the film, as well as the odd scene of beautifully composed photography and editing. The action choreography is solid but stiff - it often feels less like fierce combat and more like the collection of pre-rehearsed routines that it is.

Fan Bingbing and Huang Ziaoming both look the part but fail to make a strong connection, either with each other or with the audience. Much more impressive is Vincent Zhao as the treacherous Jin Duyi. He plays the role with a great deal of presence and charisma. The three fight it out in the film's climax, which unfortunately boasts some of the most egregious use of green screen backgrounds I've seen in a long while. It makes the setting look ridiculously fake, and pretty much stops any attempt at gravitas in its tracks. Most unfortunate of all is the climax's use of Leslie Cheung's ballad from The Bride with White Hair. When you're in the middle of the climax of your movie, the last thing you probably want to do is remind the audience of an older, much better version of the same tale.
Posted by Grant at 7:44 AM