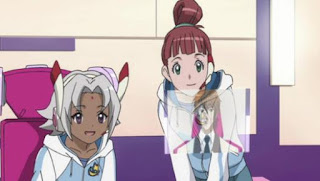 The Bentenmaru risks losing its pirate's license if it does not embark on a piracy mission immediately. Unfortunately the crew are in quarantine after being infected by a shipment of space monkeys. Thus the Odette II yacht club crew set off on their secret mission to pilot the Bentenmaru and save Marika's career as a budding pirate captain.

This is episode 15 of Bodacious Space Pirates. The earliest episodes showcased teenager Marika Kato joining the space yacht club of Hakuoh Academy, and interacting with its large cast of amiable high schoolers. Later episodes sort of abandoned those characters to focus on Marika's experiences as the captain of a pirate spaceship, the Bentenmaru. This appears to be the episode where those two separate casts finally join together: the yacht club do their best to operate the Bentenmaru while its actual crew provide support from the hospital.

Just that connection of the two halves of Bodacious Space Pirates make this episode a pretty entertaining one. There's plenty of humour for one thing, as the yacht club girls struggle to start up the ship while its regular crew shriek and wince at what they're doing. Particularly entertaining are the two princesses, Gruier and Grunhilde, who stow away on the Odette II before revealing themselves to offer their classmates snacks and refreshments.

Complications arise when the accidental firing of the Bentenmaru's weapons attracts the attention of a military squadron. I'm not sure I've mentioned it in earlier reviews, but I really adore the design of the military starships in this series. They basically look like flying knives, and never fail to amuse me when they show up. With the military approaching the race is on to learn how to operate the hyperspace drive and get the Bentenmaru out of danger.

My only main criticism is the one to which I keep returning with this series: not a lot actually happens. The pace of Bodacious Space Pirates is as glacially slow as my reviews of it. I want more to happen each episode, because as it stands not a lot does take place to make me rush to watch the next episode. It's been five months since I last watched and reviewed an episode. Before that it was nine months. When I do sit down and watch an episode, I generally enjoy it - this is the 11th good episode of 15 - but in between episodes I simply don't feel the urge to watch another. It's a real problem that's crippling the series for me.

Your mileage may vary since, as I've mentioned, the episodes themselves generally are rather enjoyable. There's just no urgency. The quality ratio is currently 73 per cent.
Posted by Grant at 5:01 PM