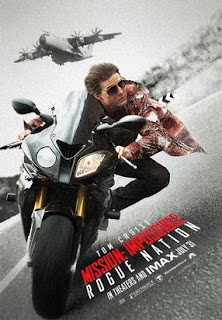 Mission: Impossible continues its march as Hollywood's slowest action movie franchise. The Fast and the Furious has managed seven films over 15 years. The Daniel Craig run of James Bond pictures has managed four in 11 years. Mission: Impossible has now reached its fifth instalment in the 20th year of its motion picture existence: an average of one film every four years. Tom Cruise was 33 years old when he first played Ethan Hunt. Now he's 53. It seems logical to assume the franchise would be pretty tired and desperate by now. Instead it feels as if it's the opposite. Since M:I III in 2006 each film has been better than the last. I think Rogue Nation may be the best Mission: Impossible so far.

As the CIA assumes control of the IMF, agent Ethan Hunt (Cruise) goes underground in his search for the mysterious Syndicate - a worldwide organisation of ex-spies dedicated to spreading chaos and unrest across the globe. Aided by a mysterious double agent (Rebecca Ferguson), Hunt sets off on a chase - escaping capture by his own government while hunting down the Syndicate's elusive master.

One of the real strengths of the Mission: Impossible series is the manner in which it swaps out high-profile directors from one film to the next. It started with Brian de Palma's very stylised take on the concept, followed by John Woo, J.J. Abrams and Brad Bird. This fifth film is co-written and directed by Christopher McQuarrie, the writer/director who previously worked with Cruise on Jack Reacher and who also wrote The Usual Suspects and directed The Way of the Gun. It turns out he was an inspired choice: it's a smart sensible screenplay that pays homage not only to the previous films but also draws a lot on the classic format of James Bond. This is a slickly presented spy thriller, replete with all of the elements one would sensibly expect that kind of a film to have.

Something unexpected in its repertoire is humour: it's not that the M:I films have never cracked a joke in two decades, but it's surprising just how regularly and genuinely funny Rogue Nation is. It's not afraid to engage in a little self-mockery. More than that, the whole film feels relaxed. At a time when the Bond films seems driven to be purposefully dour and wracked with torment, M:I seems intent on kicking back and having fun. The whole cast feel effortlessly engaged and entertaining to watch, including Simon Pegg (who gets a lot more material with which to play this time around), Jeremy Renner and series stalwart Ving Rhames (still the only cast member other than Cruise to last all five films).

Sean Harris plays the film's villain, Solomon Lane. To be honest he's probably the film's weakest part, playing the role with a strange croaking whisper that may be intended as creepy and ominous but ultimately just seems like parody. Thankfully he's really the only unsatisfactory element in the whole film, and only to a small degree.

The action is exceptional, kicking off with a wonderful and widely promoted stunt involving Tom Cruise hanging onto the side of a plane in take-off and running through a string of great set pieces including a car chase in Morocco and shenanigans backstage at the Vienna Opera. While many of the sequences - particularly the opera - felt reminiscent of other films, McQuarrie still managed to give them a fresh edge or angle each time.

Of course ultimately it's still a Mission: Impossible film, so many of the elements are pre-determined in advance. There's going to be quite a bit of Tom Cruise hanging off things, or jumping from things, or running really fast in that weird high-armed fashion that Cruise has. There's quite a lot of Tom Cruise being Tom Cruise. If you're tired of that, or never liked it in the first place, then Rogue Nation will not be a film to change your mind. If you like Cruise as an actor, as I do, and enjoy Mission: Impossible, as I also do, then this fifth film really is the strongest mission yet.
Posted by Grant at 7:17 AM