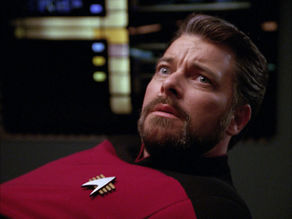 It's 12 November 1990 and time for more Star Trek: The Next Generation.

While on an away mission Riker (Jonathan Frakes) is overwhelmed by toxic gas and collapses unconscious. When he wakes, it is 15 years in the future: he has a son, he is captain of the Enterprise, and he is about to finalise negotiations for peace with the Romulan Star Empire.

"Future Imperfect" takes a critically flawed premise and reworks it into an excellent little paranoid thriller that showcases Jonathan Frakes' performance as Will Riker and allows the series to play around with a potential future for the Next Generation characters. The critical flaw is obvious from the outset: this is a continuing series, and there's absolutely no chance that the future Enterprise upon which Riker wakes is authentic. The moment Riker wakes, the episode becomes a exercise in waiting for the penny to drop. How the episode overcomes this is part of why I like it so much.

It's ultimately a pretty simple trick. We know instinctively that Riker's future life is an illusion, so when he works it out and rebels we're not surprised to see the Enterprise bridge fade away and Riker to find himself on a Romulan holodeck. What we possibly don't anticipate is for this new reality - Romulan Commander Tomalak (Andreas Katsulas) interrogating Riker for intelligence - to be an illusion as well. Both fantasy worlds, one nested within the other, are the work of a lonely alien child left alone on an isolated planet when his people were massacred. It's a very old-fashioned sort of a premise, and it's easy to imagine Kirk or Spock trapped in a similar sort of situation. It's all rather clever, since while we all would likely see through Riker's future environment we're much less likely to see through his apparent captivity at the hands of the Romulans. That reality seems much more suited to The Next Generation, and so it's incredibly easy to buy.

The illusory future into which Riker finds himself is actually a pretty convincing one: captain of the Enterprise, a son named Jean-Luc, Data as his first officer and Picard now promoted to admiral. Even knowing that the events depicted won't be true, there's still a fair amount of fun to be had playing "what if" with the characters.

Chris Demetral does a convincing job playing Jean-Luc Riker, although it has to be said that his final form - as the abandoned alien child Barash - is one of the least convincing aliens in The Next Generation to date. Thankfully he's only onscreen for a minute, but it's a pretty embarrassing minute for all concerned. Andreas Katsulas returns as Tomalak in a slightly expanded role - he's engaging as always, particularly given how thinly written his role is.

All up "Future Imperfect" is an entertaining episode with one slight stumble - Barash's prosthetic head - but also one genuinely clever innovation - the double climax. It leaves Season 4 with six good episodes out of eight, and a quality ratio of 75 per cent.

One point of trivia: Patty Yasutake makes her debut here as a nurse in sickbay. Her character will eventually be named as Alyssa Ogawa, and appear in another 15 episodes as well as both Star Trek: Generations and Star Trek: First Contact.