Doctor Who: "The Woman Who Lived" 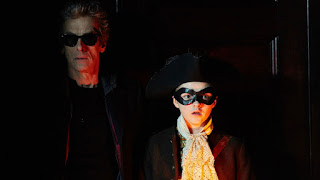 The Doctor tracks a dangerous alien artefact to 1651 England, where he unexpectedly encounters Ashildr (Maisie Williams), the young viking woman whose life he saved - and inadvertently extended - 800 years earlier.

"The Woman Who Lived" forms the second part of a fairly odd two-parter. In the main the two episodes are unconnected: one focuses on an alien harvesting of a viking village, and the other on an attempted invasion of Earth by leonine humanoids from another dimension. To be honest in both cases the individual episodes have been fairly sub-par, particularly given the strong quality of the rest of Season 9 so far. Where both have excelled have been in the treatment of Ashildr, and the discussions she (and Clara last week) share with the Doctor about the burden of immortality.

Immortality is a fertile ground for fantasy works, since it deals with such primal, basic concerns: fear of death, fear of loss, fear of growing old. It's commonplace for texts to focus on the immense sadness that such longevity would foster, but slightly less common to focus on even worse outcomes. What would happen if you lived for so long that you forgot to be a human at all? It's an idea that's been used before, but not in Doctor Who. It fits the series marvellously.

Earlier episodes have posited that the Doctor keeps his companions around to give him a sense of humanity, and stops him from losing perspective. "The Woman Who Lived" not only suggests that it's the Doctor's age (2000 years and counting) that puts him at risk of becoming a cold, distant monster - it actually demonstrates how it happens. In the 9th century the Doctor saved Ashildr's life with alien technology but cursed her with immortality in the process. In the 17th century she's now an isolated, amnesiac loner. She's lived too long to care about others any more. She's too broken by centuries of loss to even attempt friendships.

There is an actual sci-fi storyline here: Ashildr is secretly helping a leonine alien recover an amulet to return him to his own people. The problem is that it's brief, fairly generic and uninvolving. The meat of the episode is in the Doctor's reactions to Ashildr, her profoundly tragic backstory, and the secret of why he refuses to take her away and explore the universe. It's great dramatic material, and it's very well played by Capaldi and Williams. It also ends on a remarkably sinister note, which foreshadows some fairly dark material in the Doctor and Clara's near-future. Ashildr, it seems, will return.

This has been a highly unusual two-parter: weak and generic in terms of plot but fascinating in terms of dialogue and character. I particularly liked a lot of Catherine Tregenna's writing this episode, and I dearly hope she returns next season with a more dramatic storyline behind her. She's the first female writer in, what? Eight years? Hopefully she'll be joined by more women on the writing team very soon.

As with "The Girl Who Died", this isn't a great episode overall but it is sufficiently entertaining to get it over the line. Season 9's 100 per cent track record remains safe for now.
Posted by Grant at 6:00 PM