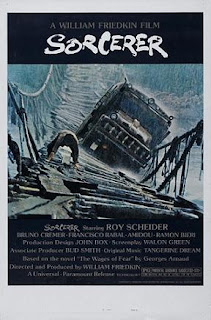 In the middle of the South American jungle an oil well is burning out of control. To close off the well, explosives are desperately required. The only explosives available started to rot away months ago, and the nitroglycerin pooling at the bottom of each case will explode at the slightest disturbance. So four runaway criminals desperate for money board a pair of trucks - three cases of explosives in each - to make the treacherous 218 mile drive to the well.

William Friedkin's 1977 thriller Sorcerer is a loose remake of the classic French film The Wages of Fear. Or, at least, it's another adaptation of the Georges Arnaud novel. I call the adaptation 'loose' because all it really takes is the basic premise: driving trucks of unstable explosives through a jungle. Friedkin took this concept and added his own cast of four disparate criminals: an American getaway driver (Roy Scheider), a corrupt French businessman (Bruno Cremer), a Mexican professional killer (Francisco Rabal) and an Arabic terrorist (Amidou). The first half of the film introduces their respective back stories, and brings them all to the same backwater Latin American town. The second half is one long, relentless chain of suspenseful set pieces.

The film begins in a pretty confusing fashion, introducing each of the four men in turn and showing off their reason for fleeing to South America. Some, like the introduction to Nilo the assassin, are so sudden and blunt as to simply be confusing. Others, like Frenchman Victor Manzon's unsuccessful race to keep the police out of his business deal, takes an oddly long time - long enough to make you wonder if fraudulent investments is what the film is actually about. It takes until all four men are introduced and hiding out in the dirt-poor village of Porvenir that the film actually manages to get going.

I think this deliberately messy, vignette-based opening act is one of the reasons that Sorcerer struggled in cinemas. For one thing it's an American film and it takes about 15 minutes for anybody to say anything in English. It introduces one character at a time without any indication of why they are being introduced or what relevance they have to the story. One prologue would have been understandable. Four in a row potentially confuses the viewer. The mainstream audience, then four weeks into their summer-long love affair with George Lucas' Star Wars, must have turned away in droves. Sorcerer was an expensive production too, shot on location in the Dominican Republic in poor weather. It cost about US$22 million to make, and only made back about US$9 million worldwide.

So the oil well blows, and our four protagonists board two 40 year-old trucks - each packed with explosives - and set off into the jungle. The second hour of Sorcerer is a white-knuckle experience as
they navigate their trucks over rough, unstable roads, across rotting bridges and along the edge of crumbling, rocky cliff-sides. All four men are wanted criminals, and certainly the film doesn't go out of its way to make them likeable, and that ultimately makes all four of them expendable. The trucks could explode at any time. Friedkin does a sensational job of making you constantly feel they could explodes in a second's time. One stand-out sequence sees two of the men trying to get their truck across a rickety wooden bridge in the middle of a storm. Every moment feels as if the truck will overturn, or the bridge will collapse, or the heaving storm water will hit the truck hard enough to set off the explosives. I honestly don't recall the last time I was so tense just watching an action sequence.

The film is enhanced by a stunning electronic score by German pop group Tangerine Dream. I'm not usually a fan of their work, and certainly haven't often enjoyed their film scores, but here it works astonishly well. It enhances rather than detracts, and helps to give the film a slightly sinister, almost supernatural tone.

Friedkin wanted Sorcerer to be his master work. The truth is, it's not as consistent or accomplished as his two greatest films - The Exorcist and The French Connection - but it has to be said that it's almost as good. Almost as good as two of the best American films ever made is a pretty impressive achievement.
Posted by Grant at 6:41 PM