Star Trek: The Next Generation: "Remember Me" 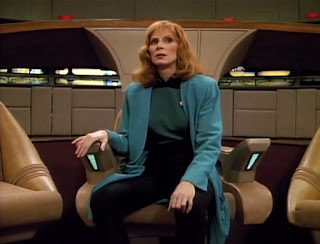 It's 22 October 1990 and time for more Star Trek: The Next Generation.

When Wesley Crusher (Wil Wheaton) attempts to run an experiment with the Enterprise's warp core, it sets off a chain reaction surrounding his mother Beverly (Gates McFadden). People keep vanishing around her. With the Enterprise's crew rapidly diminishing, with no record of them having ever existed, Dr Crusher is on a race to find a solution to the problem before she's the only person left.

"Remember Me" is an episode with a fairly neat premise, and certainly a lot of dramatic promise, but in the end it's strangled by three key problems that are ultimately too damaging for the episode to succeed. It's a shame because the central idea could have been terrifying: imagine having the entire universe contract around you, until you're the only person left in a reality only a few hundred metres wide. If only the episode had worked.

So as far as I can see it, there are three major problems that stop "Remember Me" from working. The first is Wesley. His science experiments didn't threaten the Enterprise and it's crew that often, but they did often enough that it feels like an eye-rolling cliché. What's more it damages the character every time. Wil Wheaton was and remains a great actor, and the manner in which the writers used Wesley in The Next Generation was reprehensible. Of course by Season 4 the damage had been done, but he's still a character I root for and every time they use him in this fashion it sets my teeth on edge.

The second problem is the inclusion of the Traveler (Eric Menyuk), an all-powerful alien being who visited the Enterprise once before in Season 1. He has the magical ability to manipulate time and space with his thoughts, and continues to explain that Wesley is going to be immensely powerful and amazing, and so on. The problem is that I really never have a clue what the guy is talking about. It's all maddeningly vague, and never seems to fit with the series overall. He's an unwelcome presence.

Finally, and most critically, there's Gates McFadden. Put simply, she is not the strongest actor in the series. I can never quite tell if it's her abilities as an actor, or if it's the way she gets directed, or the quality of scripts she is given, but in seven seasons and four films she rarely impressed or convinced me. There seems to be a firm trend that if Dr Crusher is the focus of an episode, then that episode is not going to be so good.

A great initial concept and a solid third-act twist can't quite overcome poor writing, unwanted characters or weak performances. "Remember Me" is Season 4's first dud, bringing the quality ratio down to 80 per cent.

As a point of trivia, "Remember Me" is the 79th episode of Star Trek: The Next Generation. The original Star Trek ran for 79 episodes in total, so this is the point when the sequel series finally caught up with the original.
Posted by Grant at 7:45 AM