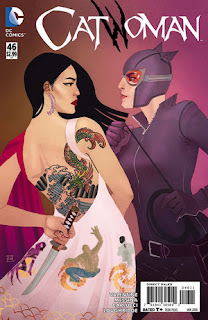 Catwoman has always been a tricky character for DC to get right. Some times they manage it, and there have been more than a few excellent runs on her solo titles over the past 20 odd years. Unfortunately there have been more than a few bad runs as well, generally ones that give the character a leering sexuality and present her adventures through a semi-seedy male gaze.

In the past year Catwoman (the comic) has avoided all of that, thanks to solid non-typical artwork by Garry Brown and later David Messina and a truly outstanding set of scripts by Genevieve Valentine. The covers by Jae Lee and Kevin Wada have also been exceptional. The story has seen Selina Kyle assume control of one of Gotham City's most powerful crime families, enter into a relationship with the daughter of a rival crime head, and fight to stop Black Mask from overthrowing the apple cart and taking all of Gotham for itself. It's been a great and intelligent run that actually gave Selina things to do and a supporting cast to care about.

This run ended this week with Catwoman #46, as the book's various threads finally pull together and wrap up. Not all of the endings are happy, and by the conclusion Selina's riding a motorcycle out of Gotham on her own. It's all wrapped up for whoever replaces Valentine as writer next month. This has been a sensational run, and hopefully will come to be remembered as one of the great ones for this character. The first half is already available in a trade paperback, so I strongly recommend you track it down and see what you've been missing. It might have just been for a year or so, but this has been one of DC's very best books. (5/5)

Under the cut: reviews of Batman, Chewbacca and Darth Vader.

"Superheavy" reaches its sixth instalment as new supervillain Mr Bloom is finally revealed in full. He's a remarkably violent and horrific character, with plenty of impalings and even a close-up shot of somebody getting an eye popped out of their head. Effective and dramatic, yes, but it does bring into question who the market for Batman is. This is one of DC's mainstays, in continuing publication since 1940. I've been reading it for about 30 years or so. I wouldn't give this comic to a child nowadays as it's clearly unsuitable. A sign of the times, or a sign DC has taken its eye completely off the ball? (4/5)

One of the real achievements writer Gerry Duggan has made with this miniseries is that he's understood Chewbacca isn't really a character that works as the lead. As a result he's paired the Wookiee space pilot up with a teenage girl, and sent him on a mission to help free her community from a criminal gang and the Empire. It's a straight-forward adventure story: broadly pleasing, jumping from one crisis to another, and wonderfully illustrated by Phil Noto's beautiful coloured artwork. Is it the best Star Wars comic that Marvel has to offer? Probably not, but it is proving to be a lot of fun. (3/5)

Darth Vader, however, almost certainly is the best Star Wars comic that Marvel has to offer. Not content with showcasing the galaxy's most notorious psychopath, Keiron Gillen has introduced a range of engaging and original characters, notably the self-interested and mercenary archaeologist Aphra, who has been tracking down Luke Skywalker's whereabouts on Vader's behalf. This issue concludes the second story arc, in which Vader secretly launched a criminal enterprise and then got immediately assigned by the Empire to track down whoever launched that enterprise and bring them to justice. It's not as strong a conclusion I had hoped for, but the characterisation and dialogue remains excellent. (3/5)
Posted by Grant at 5:57 PM