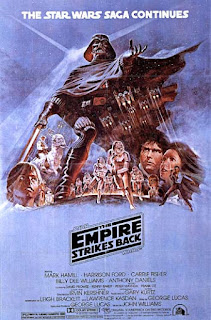 The general wisdom is that, of the six Star Wars films released to date, The Empire Strikes Back is far and away the best of the series. Certainly that's the opinion I've held for most of my life, following a brief childhood period where I preferred Return of the Jedi because Luke was cooler in black and with a green lightsaber. I still regularly watch at least three of the Star Wars films, finding new little background details and moments each time, and as part of this I recently re-watched Empire for about the fiftieth time.

It really is still the best of the Star Wars saga, and in my opinion that's by a considerable margin too. It's more dramatic, more visually attractive, it's funnier, and it has much stronger emotional stakes. It takes its starting point from the original Star Wars and pushes everything that worked in that film while adding much more believable characterisation.

The synopsis, for those who've been living under a rock for the past 35 years: the Rebel Alliance are chased out of their secret base by an Imperial attack. While Luke Skywalker travels to the jungle planet of Dagobah to train as a Jedi with the mysterious Yoda, Han Solo, Chewbacca and Princess Leia go on the run from the Empire. They are pursued from a dangerous asteroid field to a mining colony on the planet Bespin, where the villainous Darth Vader is already waiting for them.

So why is The Empire Strikes Back such an outstanding film? Above all else, it's about the screenplay. George Lucas wrote the original Star Wars single-handedly, and while he was and remains an outstanding producer and a driver of film-making technology he has never been an outstanding screenwriter. Don't get me wrong: Star Wars is a wonderful film and tremendously enjoyable, but its storyline is openly cribbed from Kurosawa's The Hidden Fortress and its dialogue is very earnest and on-the-nose. While Lucas developed the initial storyline for The Empire Strikes Back, its screenplay was written by noted science fiction author Leigh Brackett and then Raiders of the Lost Ark writer Lawrence Kasdan.

The story of Empire is a much more original work, and Kasdan's dialogue is the best the series ever had. The characters pop off the page. The funnier bits are much funnier, and the characters feel more rounded and interesting. There's much less trading on archetypes in this second film. Significantly: the good guys tend to lose, and the bad guys tend to win. Even by today's standards that's quite remarkable for a mainstream action-adventure film.

The screenplay also does a marvellous job of taking the characters who worked best in Star Wars and maximising their use in the sequel. Among the rebels, that means putting Han Solo (Harrison Ford) front and centre for the bulk of the film and effectively sidelining Luke Skywalker (Mark Hamill). Hamill is great as Luke, and very underrated, but the bottom line is that in Star Wars he was arguably the least interesting character. All of the shades of grey, and mixtures of motives, were in Han, so it's to Han that the film gravitates. There's a conflict to Han here: he's trapped between running away or finally standing for something. Luke has to wait until Return of the Jedi for his chance to take back the spotlight - which he does, and marvellously so - but for now this is Solo's movie.

On the other side we have Darth Vader (David Prowse and James Earl Jones). In Star Wars he was effectively the henchman, taking second place to Peter Cushing's wonderfully dry and aristocratic Moff Tarkin. With Tarkin dead, Vader has clearly moved up in the Empire's administration. Along with everybody else, he's a much more complex character in the sequel. His motivations don't seem quite so cut-and-dry. There's also a truly brilliant running joke regarding Vader constantly murdering any Imperial captain or admiral who disappoints him. That in itself is not a new joke. Movie villains slaughter their staff all of the time. What makes it brilliant is the film's conclusion, where Admiral Piett (a wonderfully nervous Kenneth Colley) fails to stop the Millennium Falcon's escape and Vader simply pauses thoughtfully before walking off. It makes Vader not only murderous but also unpredictable - and that makes him both funny and utterly terrifying.

Of course there's also the film's master stroke, and still pretty much the most effective twist in cinema history. Both Luke and the audience believe Vader to be the man who murdered Luke's father, right up to the moment where Vader admits he is Luke's father. It isn't simply a brilliant surprise. It fundamentally rewrites a lot of what the narrative is about. We've spent almost two films assuming Luke is out to get revenge, and suddenly we're forced to adapt to a story of Luke seeking his father's redemption instead. The Empire Strikes Back ends with Vader triumphant, Han Solo kidnapped, the Rebel Alliance on the run and Luke missing a hand and utterly traumatised and confused beyond all reason. Star Wars ends with a victory and a medals ceremony. The Empire Strikes Back ends with Brackett, Kasdan, Lucas and director Irvin Kershner throwing a deck of cards into the air and doing jazz hands as they flutter to the floor.

I mentioned Irvin Kershner, who is one of the film's other great assets. Put simply, he's a much better director than George Lucas. Thankfully Lucas is still there, giving guidance and shaping the fictional universe of the films, but it's Kershner who draws out much better performances from the cast. Everybody feels much more comfortable in their roles, and everybody comes across as more interesting characters as a result. There are several key scenes - notably Han's freezing in carbonite and Luke and Vader's final confrontation - that positively leap from the screen. The lighting and the set design are also remarkable. The carbon freezing chamber is one of the most beautifully lit scenes I've ever seen in a film, and the enormous scale of the film's sets gives it a massively expanded scope and atmosphere. Seriously check out the sets the next time you watch the film. It's easy to miss just how enormous most of them are in comparison to the other Star Wars features.

There are a few other achievements worth noting. John Williams returns with an even better orchestral score than the original, due largely to the asteroid field chase and his new "Imperial March" - which is so iconic most people seem to mistakenly believe it's used in the original film. Puppeteer Frank Oz joins the cast as the diminutive Jedi master Yoda, which is a character that by all logic should never have worked as well as he does, and yet is given so much life and personality. The asteroid field chase is a masterpiece of visual effects and model work. Luke and Vader's lightsaber duel fulfils the potential hinted at back in Star Wars: a much longer, more satisfying fight than anything Ben Kenobi did.

I have long considered the concept of the 'perfect film': not necessarily the best or most worthy films ever made, but the ones where the film achieves exactly what it is intended to. The Empire Strikes Back is a big, loud Hollywood blockbuster intended to showcase an imaginative science fiction world with likeable characters, a fast-paced adventure story and gripping action sequences. Everything it aims to do it does faultlessly. It is to my mind, and undoubtedly so, a perfectly made film. The forthcoming The Force Awakens has a very high bar to overcome.

NOTE: The original version of this review misidentified Kenneth Colley (Admiral Piett) as Bob Peck, a misapprehension under which I've been operating my entire adult life. Apologies for any confusion.)
Posted by Grant at 8:15 PM