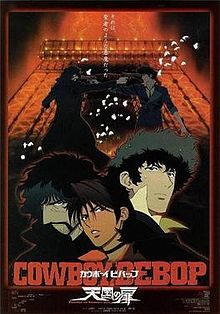 It's the year 2071. On the Mars colony, a terrorist attack destroys a container truck and spreads a deadly pathogen that infects more than 300 civilians. When a staggering bounty is placed on the head of the man believed responsible, a group of space-faring bounty hunters set off to track him down.

Those bounty hunters are Spike Spiegel, Faye Valentine, Jet Black and Edward Wong - known to anime fans around the world from their popular television series Cowboy Bebop. Bebop was a sensational science fiction anime that combined bounty hunter action with a stunning and eclectic musical score. Each episode felt like a small 25-minute feature, combining its various inspirations and creating a highly dynamic and tremendously entertaining series in the process. The cinematic qualities of the series made it a pretty easy fit for a spin-off feature film. While anime series receive film spin-offs and follow-ups all the time, they're rarely as satisfying or as well produced as this one.

There's a degree of realism to the film that really sets it aside from a lot of other animated movies. It's not simply in the way the characters are animated; it's in the way they pause and sigh, or the way they walk around the city. It's in the architecture of the buildings, and the immersive combination of sound, music and vision. In an early sequence Spike journeys into the city's Moroccan district. It doesn't simply feel like the product of an artist - it feels like an actual place that's simply been illustrated and animated. The film has a really strong sense of lived-in space. Despite being an animated city in a science fiction movie, it feels real.

That realism extends to the film's tone. While much of light-heartedness of the television series is weaved through the narrative, it is ultimately a much more mature and sombre kind of a story. While the series also told more serious stories from time to time, they were never as smoothly integrated and nuanced as they are here. In many respects you could adapt this film to live-action without any significant changes to dialogue or aesthetic. The jump from television to film enables the story to be a little darker as well, and a bit more violent, and that suits the medium very well. While the film is set during the latter period of the television series, its audience would have already seen the series to its end. This gives the film an additional emotional frisson, since it's able to knowingly foreshadow events in a haunting, melancholic manner.

That all makes the film sound terrible depressing. The truth is that the darker elements are punctuated by great scenes of comedy and some tremendously animated action. A shoot-out on an elevated train mid-way through the film is excellent staged and beautifully staged, for example. The film's numerous martial arts fights have a wonderful sense of authenticity to them as well.

To be honest the film's greatest asset is Yoko Kanno's eclectic, highly inventive score. It combines elements of jazz, western, pop, opera, Hollywood and Arabic music. It playfully jumps back and forth: always unexpected, but always well-suited. It's no surprise that Kanno is one of Japan's most in-demand composers.