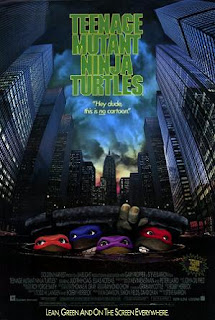 Is there a cultural artefact that screams "1990" more definitively than the Teenage Mutant Ninja Turtles movie? You could maybe turn to pop music - Technotronic, Ya Kid K, MC Hammer - but they're all in the film's soundtrack. You could turn to other films - Ghost, Home Alone, Pretty Woman - but none of them seem to be so aggressively of their time nor capitalising so heavily on the pop culture around them.

The Ninja Turtles originated in a 1984 comic book: its creators Kevin Eastman and Peter Laird heavily parodying Marvel's X-Men and Daredevil in the process. Readers soon got hooked on the ridiculous set-up - masked anthropomorphic turtles named after Renaissance artists and instructed by a talking rat - and the comic went from strength to strength. Once a television cartoon and toy line were created in 1987, Teenage Mutant Ninja Turtles exploded into a genuine phenomenon.

With such huge success one would assume a feature film adaptation was a no-brainer. Instead it was a real struggle to convince any studio to produce it. Hollywood had strong memories of Cannon's Masters of the Universe, another cartoon-to-film adaptation that came to cinemas far too late to catch the craze at its height. In the end the Ninja Turtles movie was produced by Hong Kong studio Golden Harvest, shot in North Carolina, and distributed by New Line Cinema. Hollywood may have scoffed at Teenage Mutant Ninja Turtles, but upon its release it grossed more than $200 million dollars worldwide and became the ninth-highest grossing film of 1990.

What's fascinating is just how well the film holds up today, 25 years later. There have been another four feature films starring the Turtles - two sequels and two remakes - but none have come close to matching the charm and appeal of the original. Some of the appeal is intentional. The Turtles, for example, have never looked better. Some of the appeal just results from the low-budget manner in which the film was made. It is not, for example, set in a remotely convincing New York. The egregious runaway product placement, with a brand in nearly every shot, makes for an entertaining drinking game if one is so inclined.

A film like this rides and falls based on how effectively it realises its protagonists. In this case it meant going to the best team imaginable: the Jim Henson Creature Workshop. The remotely puppeteered animatronic Turtle heads were among the most complex Jim Henson's company had ever developed. They not only had to express a range of emotions and dialogue, but also be hardy enough to survive a lot of physical movement. They remain an unqualified success, giving each Turtle his own personality of visual tics. As physical creations they have a realism and a tactility that the computer-generated Turtles of the 2014 remake simply couldn't achieve. Even their mentor Splinter is very realised, although he seems a lot more Muppet-like than his adopted children (and performed by Kevin "Elmo" Clash).

The supporting cast are all solid, notably Elias Koteas in a notable early role as vigilante Casey Jones. The screenplay is relatively simple, but does its job well: get in, tell an entertaining story with plenty of martial arts action, and get out. It's actually a smart move keeping the script as simple as it is, as it keeps the focus on the characters. Later attempts at Ninja Turtles films over-complicate matters, and it detracts from the simple appeal that the Turtles have.

Director Steve Barron exploits his relatively modest budget very well. He was the second unit director on Labyrinth, and thus knew his way around shooting with puppets. The action is well staged and choreographed. Oddly enough Star Wars is quite a visible influence, reflecting in numerous story beats and moments throughout the film.

It's by no means a perfect film, but it remains a highly enjoyable one. These days it's basically an exercise in nostalgia for those of us who saw it in our youth: so much a product of its time, so much a snapshot of its year.
Posted by Grant at 4:53 PM