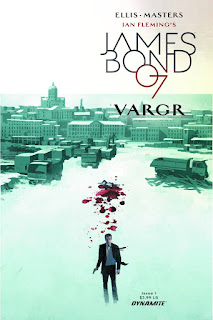 This week Dynamite publish the first issue of their much-anticipated James Bond comic book, written by Warren Ellis with art by Jason Masters. It's a perfectly timed laugh, with Spectre unrolling into cinemas around the world over the next few weeks. What strikes me as unusual is that it seems to have taken this long for a proper James Bond comic book to exist at all. Sure there have been newspaper strips in the past, and a few miniseries adaptations of Roger Moore's films back in the 1970s and 1980s, but an original serialised comic book? I'm not sure there's ever been one before now. (Note: it turns out Dark Horse produced a few miniseries in the early 1990s.)

It's an odd issue, to be honest. Masters' artwork is great, and suits the material well with the sort of clean-line style I tend to prefer in comic books. Warren Ellis' script, however, seems to lean heavy on pastiche and stereotype, with Bond's own personality expressed in such an extreme fashion I felt inclined to check the cover to ensure I wasn't reading Archer instead. The action prologue is deftly handled. The subsequent scenes of Bond flirting with Moneypenny, getting a mission from M, and some equipment from Q, all feel remarkable old-fashioned and dreadfully creaky.

There's so much potential in a monthly James Bond comic book. The art is top-notch. The script needs a lot of work if it's going to stand out enough. One feels that in this case Ellis is taking the money and running. (3/5)

Under the cut: reviews of two Doctor Whos, Detective Comics and Doctor Strange.

With the Buccelatto/Manapul run on Detective Comics coming to an abrupt and messy end, Peter J. Tomasi has dived in to pick up the reins and give us something that's actually a lot of fun: Jim Gordon's first adventure as a member of the Justice League. It's a cleverly written issue, with an alien mystery perfectly suited to Gordon's skills as a police officer running a crime scene. I'm still not sold on Takara's art, which feels better suited to a more grounded storyline than this, but it's solid enough to tell Tomasi's story well. (3/5)

Dr Stephen Strange continues to fight against the strange demonic beings that erupted from his troubled visitor: librarian Zelma Stanton. Chris Bachalo is the perfect artist for this take on Doctor Strange, in which Jason Aaron seems to be pushing comedy and humour on an equal level with the expected interdimensional weirdness. It all gives Strange a wonderfully loose, relaxed feel and makes him much more relatable than the serious, distant magician he's usually presented to be. I wonder if this is a sign for how Marvel Studios will treat the character in his movie next year. At any rate this is shaping up to be a great series for one of my favourite Marvel characters. (4/5)

Doctor Who: The Eighth Doctor #1

Titan Comics release yet another Doctor Who series. After the launch of three ongoings dedicated to the 10th, 11th and 12th Doctors, and a miniseries featuring the 9th, it's now time for Paul McGann's 8th Doctor to get five issues in the sun. This first issue introduces the Doctor to Josie Day, an artist with unexplained psychic powers living illegally inside his house. It's an amiable enough storyline, and certain Emma Vieceli's artwork captures McGann's Doctor rather well, but all in all it's rather disposable stuff. Hopefully future issues will pick up a little. (3/5)

Doctor Who: The Eleventh Doctor #2

I hate Absalom Daak. The character was created in the pages of Doctor Who Magazine some decades ago: an angry mercenary with a blaster pistol and a chainsaw on a mission to hack up or blow away every Dalek in the universe. He's a sort of tedious pastiche of half the 2000 AD serials, and never worked well in comic strips opposite the Doctor and his companions. I still don't like the character turning up here, but credit to Spurrier and Williams for making him the least irritating he's ever been. This is a great issue, with the Doctor on the run for crimes he may have committed in his "war" incarnation (the one played by John Hurt). Clever script, some funny dialogue, and a welcome return to the tone of Matt Smith's Doctor that I felt this book lost towards the end of its last volume. (4/5)
Posted by Grant at 7:22 AM