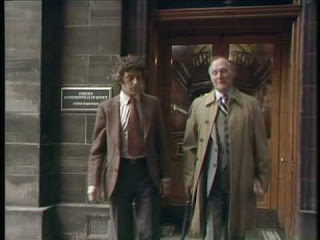 An East German scientist volunteers to defect to the West, only to be immediately kidnapped upon his arrival at a London safe house. Tom Crane (James Hazeldine) has moved too close to discovering Omega's motives, and soon finds himself kidnapped as well.

The growing conspiracy story arc hits its peak in "Illusions", originally intended to be a cliffhanger finale but which instead serves as an open-ended conclusion to the whole series. Complaints from a key lobby group, the National Viewers and Listeners Association, led to an internal review that found The Omega Factor had breached the BBC's standards on multiple occasions and broadcast adults-only scenes of violence and horror in a prime-time viewing slot. The series was abruptly cancelled, and its crew moved on to other projects. The circumstances make it a strange episode to view, since going in we know there's nothing else beyond it. All of the mysteries left behind remain unresolved.

It is a very well paced episode, starting with the kidnapping of Karl Bruckner (John Gabriel) in a Cold War-style bit of subterfuge and then tying in Tom's growing crusade to uncover Omega and his belief - already proven to the audience - that Martindale is working against him. If there's any loser in the episode it's Louise Jameson as Dr Anne Reynolds. She started the series as a level-headed professional scientist, but she's ending it as the protagonist's doe-eyed love interest. It's a shame, because the first half of The Omega Factor developed her incredibly well.

On the other hand this is a great episode for John Carlyle as Roy Martindale. Now that Martindale's participation in Omega has been revealed, "Illusions" can now focus on precisely why Martindale has chosen to betray his own country. He remains a passionate and idealistic scientist, and actually has believable motivations and points of view - it makes a change from the standard sort of one-dimensional villain. Carlyle sells Martindale's treachery in a very believable manner, particularly when events reach a point where he can no longer support Omega's actions - or the choices of its leader, Mrs Arden (a wonderfully dry Edith MacArthur).

By the episode's end, Omega's existence may have been proven to Tom, but one key ally lies dead and other has been kidnapped. He exits the series on his way to a surprising new contact in the British government. That's where the series leaves us: an international conspiracy is working to use psychic powers in order to assume control of the whole of human civilization. We never discover if Tom stops them.

This wasn't entirely the end for The Omega Factor. Earlier this year Big Finish, the audio drama production house where cult television programmes go to die, released a four-episode series of The Omega Factor starring Louise Jameson as a much older, wiser Anne Reynolds. Whether the concept continues in this format remains to be seen. BBC Scotland did have a second go of paranormal drama in 2004 with the Bill Paterson series Sea of Souls. It's always a possibility they may attempt to make The Omega Factor again.

Keeping in mind that it's a cliffhanger that doesn't go anywhere, "Illusions" is a wonderful final episode for the series' sole season. While its promises of a future direction don't get resolved, they are evocative and dramatic promises indeed. A second season could have been marvellous. As it stands, The Omega Factor ends with seven good episodes out of ten and a quality ratio of 70 per cent.
Posted by Grant at 5:07 PM