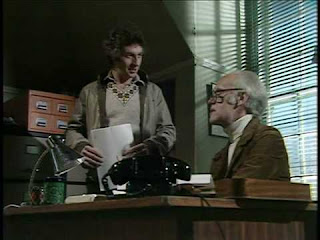 It's 8 August 1979, and time for the penultimate episode of The Omega Factor.

Tom Crane (James Hazeldine) keeps seeing glimpses of his dead wife Julia (Joanna Tope). Is he having delusions, or was her death somehow faked by the same mysterious group he has been investigating. Martindale (John Carlyle) continues to behave suspiciously, while he introduces new scientist Vashrevsky (Philip Locke) to Department 7's operations.

The paranoia gets ramped up considerably in "Double Vision", as the episode keeps the audience guessing about what's actually going on. Is Julia alive? Is she a part of the mysterious "Omega" that Tom has been tracking? Is the entire experience some kind of ruse, either using a double or some kind of psychic influence? Or is Tom simply beginning to lose his mind? The paranoia doesn't stop there, either: not only does Martindale look increasingly treacherous, Tom's not even sure he can trust Anne (Louise Jameson) any more.

This is the episode that confirms, once and for all, that Martindale is indeed working for Omega. It's been a well-played mystery over recent episodes, and to be honest either resolution would have worked in the series' favour. We also learn that it was Martindale who shot and killed Edward Drexel back in "Power Play", thus finally resolving that dangling plot thread. John Carlyle plays Martindale's betrayal incredibly well. He's managed to give the character integrity and maintained his appeal, despite turning out to be on the side of the enemy.

James Hazeldine is also very good here, showing off increasing desperation as Tom continues to see Julia without managing to confirm her survival or to catch up and confront her. He and Louise Jameson also get to share some well-developed scenes as the pressure of Julia's apparent return creates cracks in their growing romantic relationship.

Where the episode falls down is in its primary guest star: Philip Locke as the foreign researcher Vashrevsky. He plays the part in a ridiculously broad, almost parodic fashion, and as a result the character comes across as too ridiculous to be taken seriously. This is a shame, because Sean Hignett's script pushes him toward being quite a threatening and ominous figure. Locke's performance ruins any chance of that, and makes most of his scenes rather difficult to take seriously.

Then there's the episode's abrupt ending: almost a cliffhanger but not quite, and far too sudden and messy to give the viewer any real satisfaction. It's a pity, since so much the episode is exceptionally well-made. Neither the ending nor Locke's over-acting ruin the episode, but they do both dampen its appeal slightly. It's ultimately flawed but enjoyable, and with six good episodes out of nine the quality ratio rises again to 67 per cent.
Posted by Grant at 7:18 PM