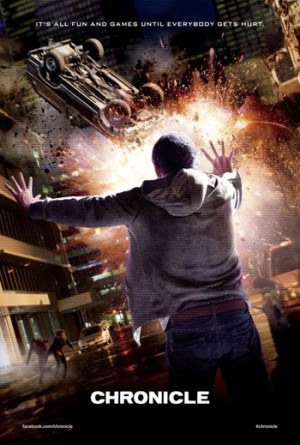 Three Seattle high schoolers stumble upon a massive glowing crystal in a cave. Shortly afterwards they start developing telekinetic powers - powers that seem to be growing stronger and stronger over time. At first it seems like the most amazing gift in the world, but as one of the three - the bullied and insular Andrew - begins to exhibit even more pronounced powers than the others, how long will it be before something snaps and all hell breaks loose?

'How long will it be' is pretty much the core question of Chronicle, an impressively staged found footage thriller by first-time director Josh Trank. The film opens with Andrew deciding to document his life with a video camera. Through that camera we see a relatively unpleasant life: bullied at school and on the street, abused by his drunk father, and generally ignored or ridiculed by his peers, Andrew is a tightly-wound spring ready to launch. That launch is going to come with his growing psychic powers: at first he can levitate pebbles. Before too long he can crush cars. The result is a film that is from it's first 10 minutes a question of 'when' rather than 'if': essentially Carrie by way of Akira, only shot from videocameras and smartphones like Cloverfield.

I am a big fan of the found footage aesthetic, and when used well it's a remarkably effective filmmaking tool. I loved how it was used in The Blair Witch Project, and Cloverfield, and particularly in the criminally under-seen Interview with the Assassin. Chronicle is mostly adept as using the technique, although as the film goes on it rapidly becomes harder and harder for Trank and co-writer Max Landis to justify its use.

As a genre piece it wears its influences openly: one-part Carrie, one-part Akira, one-part superhero archetype. What makes it all work as well as it does are its fairly well realised characters. They feel believable, yet remain simple enough to allow the film's plot to dominate. This is quite a short film, running for about 85 minutes, so there's not really a huge amount of time for complexity.

Dane DeHaan is impressive as Andrew, but it's Michael B. Jordan who really grabbed my attention as Steve, a popular student at school who jumps off the screen thanks to Jordan's overwhelming charisma. Jordan, who gained rave reviews for his performance in Fruitvale Station, is playing Johnny Storm for Josh Trank in the Fantastic Four reboot: he's the first thing about that movie that's got me intrigued.

This isn't an exceptional movie, but it is very competent and effective at what it does. It's particularly impressive that Trank made this film for only $12 million dollars, given the nature of some of the visual effects. While the format may strain a little, and a few of the supporting characters may seem a little too weakly realised, it remains an entertaining genre flick that's well worth tracking down.
Posted by Grant at 9:14 AM