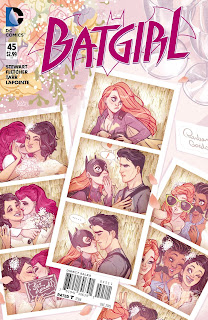 During the last two weeks of October I was out of the country, so as a result I have a huge backlog of comic books that I didn't get the chance to pick up and read, or review. Better late than never; here are some of them.

One of the things that DC Comics keeps claiming to be doing is trying to expand its audience and find new styles and tones for its comic books. In practice that really doesn't seem to be happening that often, but it's definitely continuing to happen on Batgirl. Issue #45 is about as far from the angst-ridden, violent original New 52 run as you could get and still be able to call it Batgirl. It's Alycia and Jo's wedding, and Barbara is all set to be maid of honour, new boyfriend Luke Fox in tow - until the unexpected arrival of Dick Grayson through her window.

Everyone loves a wedding, and in my experience most Batman fans have a soft spot for the never-ending romantic interplay between Dick and Barbara. It's been going on for decades, bouncing along the margins but never quite coming together. This issue he finally straight-up asks her out, but of course it's too late - she's dating Luke now, and it can't happen.

So this isn't angsty violent action any more. Instead it's Batgirl as soap opera, but what's important is that it's Batgirl as a really good soap opera. Babs Tarr's artwork really makes it work with her cartoonish style and near-pastel colouring. The growing cast of supporting characters have been well established over previous issues to make the wedding really feel important. The pairing of Barbara with Luke (secretly Batwing) really works. This is a brilliant comic book, and it's doing something no other DC Universe book is - and that makes it a valuable book too. (5/5)

All three former Robins, Bluebird and Spoiler have been targeted for assassination, and the mysterious Cassandra Cain appears to be their own defence and warning - if only she spoke. Dick Grayson's contacts find mention of the mystery villain "Mother", but before he can investigate he's off to save Bruce Wayne from being targeted too. The plot is intriguing and well paced this issue, but the dialogue gets a little rough - particularly when it comes to Jason Todd, who's constantly being written as crass and unlikeable. The art is solid, if a little inconsistent thanks to five pencillers and inkers working on just 20 pages. This issue was solid, but flawed. (3/5)

A much stronger issue: Dick Grayson defends Bruce Wayne from axe-wielding maniacs, with the unexpected assistance of Batgirl and the We Are Robin gang. Subsequent scenes build on Bluebird and Cassandra, as well as some worrying developments for the collected Robins. This issue really benefits from having the sole art team on every page,and Eaton, Faucher and Eltaeb do a great job of it too. So far this has been a really enjoyable weekly comic: I just hope it keeps the momentum running for all 26 issues. And this leads me to... (4/5)

Another multi-artist issue. I get that the production schedule on a weekly comic book must be horrifying to see, but on the other hand perhaps DC should have started work on this book a little earlier to ensure that there's only one consistent art team in each issue. In this issue Dick goes hunting into Tim Drake's past, while Cassandra leads Bluebird on a mission of her own. It's a fairly ordinary issue in terms of plot and dialogue, but I did noticed some nice extra touches. Cassandra's outfit cleverly echoes her pre-New 52 Batgirl uniform, for example. I also liked the reference to St Dumas (the religious group that created Azrael, another pre-New 52 Batman character). (3/5)

Chewbacca accompanies his new young friend to help rescue her father and the other slaves from a mining facility. This comic is absolutely nailing the comedic potential of Chewbacca as a lead. He's big, ill-tempered, nobody on the planet can understand what he's saying, and he's engaging in some absolutely brilliant combat scenes as only a Wookiee can. Phil Noto's artwork is great as well, with a nice sort of watercolour feel to the book as well as some exceptional facial expressions - one Chewbacca-versus-guards punch-up is entirely illustrated by the facial expressions of the girl watching it. If you're feeling like some good Star Wars comic action, this book is providing some of the best. (4/5)

Aphra finally scores Luke Skywalker's location, just as the Empire comes knocking. They're led by Darth Vader, not only Aphra's secret master but also the Imperial official tasked with bringing her - and her secret master - to justice. It's all delightfully Philip K. Dick, with Vader being forced to chase his own tail while simultaneously making it look as if he remains 100 per cent loyal to his Emperor. Salvador Larroca's artwork is stunning as usual. I love this comic to bits: it emphasises everything that made Vader such an iconic character, yet cleverly never over-uses him. (5/5)

Reading Invader Zim really is just like watching an episode of the original animated series. The character design and aesthetic is all there, with Alexovich doing a great job of emulating Jhonen Vasquez's iconic style. Former series writer Eric Trueheart continues to write very authentic scripts, aided in no small part by Vasquez adding his own dialogue throughout. It's vividly coloured by Rikki Simons (the voice of Gir) and Mildred Lewis. Whether or not you should read this comic really boils down to whether or not you liked Invader Zim when it was on television. This is pretty much a pitch-perfect adaptation. (4/5)

Matt Fraction and Christian Ward's science fiction, French-styled, gender-bent adaptation of The Odyssey continues its current and rather unexpected segue into The Thousand and One Nights. All comic books are art, of course, but this is what you might describe as an arthouse comic book. It is dense, experimental, complex, imaginative, provocative and challenging. I think that's important: I think it's good to occasionally read a comic that really makes you work to fully appreciate and absorb it. This issue is stunningly beautiful as well, both via the rhythmic free verse of the dialogue and via Christian Ward's lush and sensual artwork. In one key scene two brothers murder their adulterous partners, and it's a masterpiece of sex, violence and horror. I completely get that ODY-C will not be for everyone, but if it's for you it is superb. (5/5)

Police officer Dana Cypress and her father attempt to come to terms with Em's death and resurrection. Em, meanwhile, remains a prisoner in the government facility with the other revived. Revival has always been very good at blending and balancing elements of family drama, conspiracy thriller and both supernatural and body horror. This issue puts aside the latter parts to focus on family relationships and mourning, as well as pushing forward the thriller elements. The CIA is involved now, and they're not happy. Each issue of this comic pushes the narrative further forward. Each issue moves in a direction I did not expect. (5/5)

This rich fantasy thriller continues, as Captain Sha's murder investigation is hampered by the Spire's petulant new queen, and Pug is in for the chase of his life. To be honest the writing feels very slightly sub-par compared to the excellent three issues before it. That's more than compensated by Jeff Stokely's exceptional artwork. The panel layouts are particularly strong, using inset panels to emphasise the action sequences in a wonderful fashion. Even if this issue isn't quite as gripping as I'm used to, it's still a damned fine comic and a great fantasy series. (4/5)

Usagi accompanies a samurai on a mission to protect a beautiful rock (yes, just a rock) and deliver it safely to the samurai's lord and master. As always the black and white art is crisp and wonderfully expressive, but the story actually feels a little slight. It's a story told in 24 pages that I suspect could have been told in 10. While there's much to enjoy, a few too many pages seem to be taken up with frenzied scenes of swordplay and combat. The bottom line: any issue of Usagi Yojimbo is a great read and is absolutely worth your money - but some issues are greater and more worthy than others. (4/5)
Posted by Grant at 7:34 AM