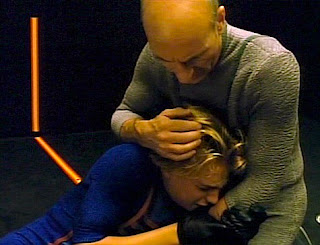 It's 15 October 1990 and time for another episode of Star Trek: The Next Generation.

The Enterprise comes to the rescue of a crippled Talarian starship, only to find a human teenager among its crew. The boy turns out to be the child of Starfleet officers murdered in a Talarian raid, but when Picard attempts to reunite him with his family he faces opposition from his adoptive Talarian father - as well as the boy himself.

"Suddenly Human" is an episode with a lot to recommend, but also one that makes a few critically damaging choices that come very close to ruining the entire story. Curiosity it's another episode about family issues - the third in a row - as Captain Picard (Patrick Stewart) struggles to overcome his awkwardness around children to become a father figure to the confused, restive teenager Jono (Chad Allen). Basing an episode around Picard is always a good idea for Star Trek: The Next Generation, because Patrick Stewart's performance will more often than not overcome any deficiencies in the script to make the episode enjoyable. In this case Stewart can't quite move past the episode's shortfalls, but he gets damned close.

There is, as if often the case, an interesting dilemma at the episode's core. Jono is human, but was adopted by the Talarian who ordered his home destroyed back when he was four years old. He's spent another 10 years living as that Talarian's son and does not identify as human. He doesn't know human culture or typical human behaviour. In fact, he's actively racist towards them. So when he's recovered by an Enterprise away team, and his true identity is discovered, should he be taken back to Earth or left - as he wishes - with his adoptive father?

So far so good, and certainly guest star Chad Allen does a very good job of expressing Jono's turmoil and confusion as he learns about his heritage and faces the possibility of leaving his Talarian family behind. Things get complicated when the spectre of child abuse is suddenly raised Dr Crusher (Gates McFadden) runs medical checks on Jono, and finds extensive evidence of physical abuse. Picard confronts Jono's Talarian father about this, and he explains away all of the injuries as childhood accidents and attempts to impress. The problem is that you can't throw an issue as important and shocking as child abuse into the mix and then throw it back out five minutes later. It winds up making Picard and Counselor Troi (Marina Sirtis) look hopelessly irresponsible: they're informed of the possibility of abuse, Picard asks the alleged abuser, and said abuser says it's all a misunderstanding. Case closed. The result is a conclusion that for all the world looks like Picard throwing a violent criminal back his victim. It's not supposed to that at all, but the feeling remains.

There's also the curious manner in which the episode sidelines Lieutenant Worf (Michael Dorn), even though his own childhood trauma is a near-duplicate of Jono's. He too survived a colony massacre, only to be adopted by parents from another species. Unlike Jono he fiercely maintained his original heritage. The dramatic potential is obvious to everyone except, apparently, the Next Generation writers room.

The episode's best parts occur once the abuse question is laid aside. Jono appears to be settling into human life on the Enterprise. He even breaks a smile and enjoys himself. Then, late at night, he sneaks into Picard's bedroom and stabs him with a knife: he's betrayed his Talarian culture, is wracked with guilt and naively sees murdering Picard as a means to effectively commit suicide (in his adopted culture, such an act would result in immediate execution). It's a brilliant surprise. We're so used to Star Trek putting human culture above those of other races, so it's great to see an episode where Picard admits he got something terribly wrong and allows Jono to go where he feels most at home.

So while there are some big problems here, there are also some excellent elements that make "Suddenly Human" well worth watching. It continues Season 4's winning streak: four episodes so far, all good. The quality ratio is an impressive 100 per cent.

"Suddenly Human" marks the Star Trek debut of writer/producer Jeri Taylor. She came to the series from a range of American TV dramas including Quincy M.E. and Jake and the Fatman. She would go on to write or co-write 13 episodes of The Next Generation, including "Final Mission", "The Wounded", "Unification", and "The Drumhead". She rose through the ranks of the production team to become executive producer for the seventh and final series. She subsequently co-created and produced Star Trek: Voyager before retiring from television at the end of its fourth year.
Posted by Grant at 9:05 AM