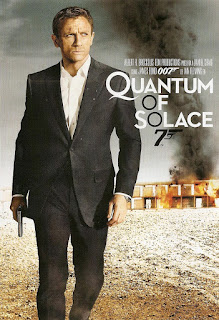 In the aftermath of Casino Royale, James Bond (Daniel Craig) goes rogue in an attempt to track down the criminal organisation that murdered Vesper Lynd. The trail leads from Italy to Haiti to Austria and finally to Bolivia, where he uncovers a secret plan to rob the nation of its government and its water.

Quantum of Solace was released two years after Casino Royale broke box office records for the James Bond franchise and re-invigorated the series after its well had seemed to run dry. At the time I thought Quantum of Solace was an excellent sequel and a highly enjoyable Bond film. Many others around me seemed to believe the opposite. The reverse happened four years later, when Skyfall was met by overwhelming praise and accolades from almost all quarters; I found it to be the worst Bond film since Die Another Day.

With the fourth of Daniel Craig's Bond films, Spectre, about to hit cinemas I felt it was worth giving Quantum of Solace another viewing. Did it hold up to my initial impressions, or were the majority of fans correct in criticising it?

To be honest, it's a slightly unusual Bond film. If you take out all of the elements that follow on directly from Casino Royale, you get a very traditional sort of story with a mad industrialist plotting to steal a country's water supply, and Bond defeating him through a series of action set pieces. What makes the film interesting is that it tells that story while climbing around the wreckage left from the previous film. Bond opened his heart to a woman, and she betrayed him and died. The criminal organisation that ensnared and then killed her is running freely without the world's secret services even being properly aware of their existence. Bond has lost all of the trust he had in M (Judi Dench), his controller, and he seems less interested in doing his duty than in seeking revenge for Vesper's death. That all makes Quantum of Solace an immensely interesting film. It even begins just minutes after Casino Royale ended. There simply isn't another Bond film like it.

A lot was made of Casino Royale rebooting the franchise, and showing for the first time how Bond came to be the spy he is. The thing is, by the end of Casino Royale he's not quite there yet. The Bond we know from Dr No through to Die Another Day doesn't exist until the end of Quantum of Solace. M asks Bond to come back to MI6. 'I never left,' he replies, dropping Vesper's necklace in the snow and walking away. That is the birth of James Bond as we know him, and it's rightfully taken two films to do it: one to destroy the original man, and the other to build the professional, immensely cynical and murderous replacement. Like it or loathe it, in story terms Quantum of Solace is the sequel James Bond needed to have.

It has a great supporting cast as well. Jeffrey Wright is back to play the best version of CIA agent Felix Leiter the Bond films have ever had. Olga Kuryenko plays Camille Montes, a former Bolivian secret service agent who, like Bond, is on a mission of revenge. She's a fascinating character, combining both a hard edge and a vulnerability. She has a depth many female leads lack in the franchise, and notably she and Bond never have sex. There's a level of respect that Bond shows her that he rarely shows other women. It's a dynamic that I like - and I wish they'd play with it more often in the films.

Camille is nicely contrasted by Fields, the junior MI6 employee played by Gemma Arterton. She is sent to take Bond back to London, gets seduced by him, tries to play in his world of cocky espionage and gets brutally murdered as a result. It's an unpleasant end, but it's supposed to be.

Dominic Green, played by the excellent French actor/director Mathieu Almaric, is an unusual villain. He's an oddly weak character, with an edginess and a subtle paranoia that we don't usually get to see. It's fascinating to watch his fight with Bond during the climax: he's hopelessly outmatched, but makes the best go of it he can by screaming and flailing around with a fire axe. I remember Almaric was one of the most criticised elements of the film back in 2008; both then and now I really like him in the film.

Apart from their 'Bond girls' and villains, Bond films are generally remembered for their action sequences. Quantum of Solace presents a very different style of action to its predecessor. While Casino Royale presented very cleanly shot and smooth chases and fights, Quantum of Solace follows a more Bourne-inspired route, rapidly interspersing the cleaner wide shots with shaky handheld moments. It's a good compromise, retaining much of the easy visibility and shot-by-shot logic of the earlier film while adding a fresh sense of chaos and urgency. It's used in multiple scenes throughout the film, beginning with a frantic car chase and then a stunning foot chase and gunfight through Siena, Italy. If there's a disappointment it's actually the film's climax, an odd chase and fight through an inexplicably designed resort hotel packed with exploding fuel cells. The film's best scene sees Bond observing and interrupting a secret meeting at an Austrian opera performance.

The film's also deliberately very fast and short. Director Marc Forster felt that Casino Royale was too long - which is perhaps a fair accusation at 145 minutes - and made the deliberate choice to direct a shorter sequel. At 107 minutes it's the shortest Bond film ever made, and possibly would have benefited from a little extra room to breathe. Given the circumstances of its creation (a writer's strike meant it was shot without ever having a completed screenplay) it's a miracle the film is as coherent and enjoyable as it is.

Quantum of Solace is a film badly in need of reappraisal. It's a unique Bond film because it doesn't really work in isolation - it's the second half that Casino Royale needed to properly resolve itself. When viewed in tandem, however, it's a great and subtly distinctive second act. All that it needs now is a third: Skyfall essentially abandoned the Quantum storyline entirely, and left audiences hanging. I really hope Spectre gives Daniel Craig's tenure as Bond the conclusive finale it needs.
Posted by Grant at 9:44 AM