Star Trek: The Next Generation: "The Loss" 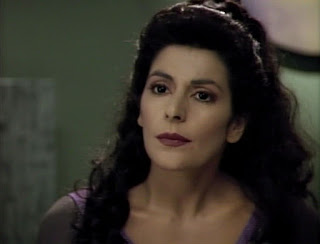 The Enterprise unexpectedly collides with a previously-unknown colony of two-dimensional beings, which trap the ship and drag it along in their wake. While the crew work to free the ship from the colony Deanna Troi (Marina Sirtis) discovers that the collision has robbed her of her empathic abilities.

"The Loss" is an episode that attempts to do something quite admirable, but suffers the limitations of its running time and the general need to keep episodes relatively self-contained. As a result it's only a partial success. On the other hand it does manage to keep its two storylines fairly well connected throughout; a common pitfall that it manages to avoid. Add in some solid performances by Marina Sirtis and Jonathan Frakes, and some wonderfully bonkers science, and it all pulls together into something that's pretty entertaining.

There's a common trope in television drama called the 'blind episode'. In it, a regular character is temporarily blinded by some accident or unexpected event, and has to spend the rest of the episode coming to terms with their disability and learning to accept the help of others. By the end of the episode the character inevitably recovers with the implication that they're a better person for having suffered the experience. It's a trope you can find in Xena: Warrior Princess, M*A*S*H, The Incredible Hulk, and a bunch of other shows. It's even revisited in a later Next Generation episode, in which Worf is temporarily paralysed. Thankfully it's a trope that seems to have had its day: it's pretty offensive to disabled viewers to suggest that a character temporarily experiencing blindness is in any way comparable to spending a lifetime that way. At its worst it become an awful sort of inspiration-based pornography: a cheap way to score some drama and ape character development without actually bothering to do the development properly.

So this is the pitfall in which "The Loss" finds itself. It tries to do things a little differently, and this both solves problems and creates more. By making the episode about Troi losing her empathic abilities it adds a fresh angle that other shows haven't been able to explore, but it also makes the episode about something which viewers have no experience. None of us are psychic, so we can't know what it's like. The script does a great job of showing some sense of it, though: there's a great moment where Troi is startled by Guinan (Whoopi Goldberg) walking up behind her, because she no longer senses her approach.

The episode also says the right things at the right time: Troi rightfully takes colleagues like Picard (Patrick Stewart) and Riker (Jonathan Frakes) to task for their attempts to console her, citing spurious beliefs like her other senses becoming stronger, or by coddling her too closely in case she breaks. There's a believable rage to Troi throughout the episode, which gradually gives way to grief, and this all rings true.

There are two big downsides to how Troi's experience is presented, and I think they're pretty closely tied together. First of all it's too fast. It feels like the events of "The Loss" take only one or two days to play out, and that's simply too short a time for Troi to have the kind of roller-coaster emotional journey that she has. The second problem, and I think it's there because of an attempt to accelerate that journey, is that to achieve the emotional transformation necessary both Troi and Riker have to say some pretty unlikeable and bitchy things. Troi lashes out a bit too hard and fast at Riker, and he in turn says some pretty horrible things about how she used to treat him when they were romantically involved. They don't ring true to the characters.

The episode's science fiction plot, in which the Enterprise becomes ensnared by a flowing colony of two-dimensional aliens, is absolutely bonkers science, but it's the kind of odd concept that always appeals to me. The cosmic string fragment is a rare case of Star Trek tossing in some real scientific theory among all the random technobabble, but altogether - and I'm speaking a very non-sciency reviewer here - it works really well. It's particularly great that Troi is involved in the attempts to communicate with the two-dimensional creatures. It ties her own storyline into theirs, and helps to make the episode a lot more cohesive than, say, "Final Mission" a week earlier.

The episode also presents a rare opportunity to see Troi doing her job: a small side-story running through the episode sees her counsel an officer whose husband has died. You kind of assume these therapy sessions are part of Troi's activities, but you very rarely see her do it.

This episode just about manages to overcome some pretty tedious tropes, and is a generally entertaining hour of television. It's the eighth good episode out of ten, leaving Season 4 with a quality ratio of 80 per cent.
Posted by Grant at 5:04 PM