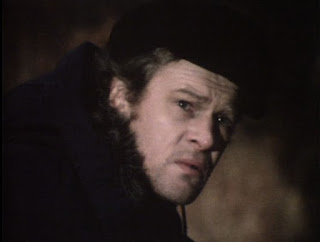 With most of the planet's population wiped out by a mystery virus, the few remaining survivors begin making plans for the future. Abby (Carolyn Seymour) stumbles upon a former union leader now establishing himself as a feudal style overlord. Jenny (Lucy Fleming) continues to wander alone through the countryside. Engineer Greg Preston (Ian McCullough) encounters two strangers in a quarry: one a rich socialite out of her depth, the other a badly injured survivalist who may be crippled for life.

Terry Nation's portrayal of post-apocalypse Britain continues in this fairly bleak second episode that benefits from some stark, quite shocking moments of selfishness and greed but suffers from disconnected and somewhat haphazard plotting. Altogether it's a worthwhile hour of television, but does feel more than a little like its author was making the script up as he went along.

George Baker is excellent as Arthur Wormley, the former trade unionist now turned regional overlord. He's an unsettling presence the moment we meet him, bringing Abby into his large manor house and offering her alcohol, dinner and the chance of a hot bath. It's all much too civilized and inviting to be believed, and indeed as the episode goes on his true character is revealed and Abby's forced to flee from the manor to escape him. There's more than a little of The Day of the Triffids about Wormley's little compound, and the episode does a great job of emphasising just how paranoid life in the aftermath of a pandemic would be. Who can you trust? Who can you believe?

Even more effective is new regular Greg Preston's encounter with the upper-class Anne (Myra Frances) and her badly injured companion Vic (Terry Scully). Anne is living in a fantasy where she thinks having a stockpile of luxury goods will mean everybody else will simply farm food for her. Greg's visibly disgusted by her attitude, and eventually leaves her and Vic to their fate - promising to bring back medical supplies and painkillers if he can find them. When he does return, Anne claims Vic has died in his absence. In the episode's darkest moment we discover she's told a lie. A screaming Vic manages to crawl to the doorway of his shelter, calling for Anne's help. She's already left with Greg, leaving him to a presumably agonising and drawn-out death. It's a wonderfully played and uncomfortable moment of horror.

Sadly Jenny doesn't get a great deal to do this episode, other than have a second encounter with an irritable and irritating Welsh tramp (Talfryn Thomas) and finally meet both Greg and Abby on the road. The episode ends with the three leads finally in the same place, but the manner in which they do finally unite does feel a little arbitrary.

While the structure feels a little out of whack, and largely unresolved, there's plenty of drama here to keep the viewer entertained. I do hope the series returns to Wormley's little empire in the making - as it's been left it does feel like unfinished business.
Posted by Grant at 9:51 AM