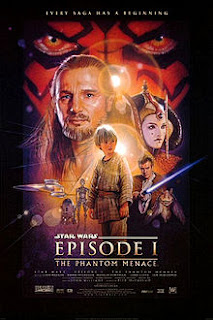 I recently re-watched The Empire Strikes Back, which as I noted at the time is widely - and in my opinion correctly - regarded as the best of the six Star Wars movies to date. Call it masochism, call it unnecessary curiosity, but it got me thinking about the opposite end of the franchise. Star Wars Episode I: The Phantom Menace, released in 1999, was pretty much the most eagerly anticipated film of all time. When it finally released into cinemas it was met with an immediately negative response, and disappointment soon changed into waves of hostility against its writer/director, Star Wars creator George Lucas. It's not that the film was simply disappointing for Star Wars enthusiasts: it was widely panned as one of the worst big-budget films of its time. Things probably weren't helped by the film coming out in 1999, one of the all-time great years for American cinema.

So while it's easy - and again in my opinion correct - to consider The Phantom Menace to be a bad film, it's not necessarily so easy to identify precisely why it's as unenjoyable a film as it is. This led me to watch the film again, and actually try to identify it's biggest problems one by one.

The synopsis, for cave-dwellers: the Trade Federation of Cato Nemoidia has established a blockade around the peaceful planet Naboo following a dispute over the taxation of galactic trade routes. When two Jedi - Qui-Gon Jinn (Liam Neeson) and Obi-Wan Kenobi (Ewan McGregor) - attempt to negotiate an end to the crisis, they are targeted for assassination. After rescuing Queen Amidala of Naboo (Natalie Portman), they escape via Tatooine to the galactic capital of Coruscant to plead Naboo's case and try and resolve the invasion.

Let us begin with the most obvious flaw in the film: its ridiculous plot. The original Star Wars was about a race to rescue a princess and destroy a planet-killing space station before it wipes out the Rebel Alliance. The Phantom Menace, by contrast, is about an artificially engineered taxation dispute whose purpose is to promote a Galactic Republic senator to the position of Chancellor so as to shore up his power base in advance of a future attack on the Jedi Order.

Once you realise that this is the core plot of the film, it becomes immediately apparent that the vast majority of what we see on screen is entirely redundant. A great deal happens, but not a lot of it is actually that interesting to see. Sure a planet in invaded, and subsequently freed, but it's neither as high-stakes an adventure as Star Wars or Return of the Jedi nor as personally involved as The Empire Strikes Back. It sits awkwardly in the middle, less like a well thought-out story and more like a collection of things that Lucas felt might be interesting to showcase on screen.

There is a pronounced lack of urgency to the film. The Empire Strikes Back barrels along from crisis to crisis. The Phantom Menace merely plods, moving from Naboo to Tatooine to Coruscant and back to Naboo with the immediacy of a lazy Sunday afternoon drive. The stakes are visibly lower: the original trilogy followed a small and desperate Rebel Alliance as it fleed from one secret base to the next, taking hundred-to-one shots against the Empire whenever they could. The Phantom Menace is the precise opposite: it follows a dominant and powerful galactic government getting taken down by two Sith Lords. There is certainly a huge amount of potential for action-adventure stories about representatives of a large government tracking down and fighting mad villains and criminals - the James Bond franchise has been doing it for more than 50 years - but The Phantom Menace fails to nail down that kind of story.

It's a damning indictment of Lucas' story that there is nothing in it that an audience needs to see before watching its sequel, Attack of the Clones. In isolation it's dull and meandering. In the context of the Star Wars prequel trilogy it's entirely redundant. Lucas could have started with the second film, and actually took more time exploring the Clone Wars - which occur between Attack of the Clones and Revenge of the Sith - and the downfall of the Jedi. Instead he's simply wasting time.

There is a major problem with the film's protagonist. You know the one. Anakin. Or is it Qui-Gon? Or Obi-Wan? Padme? Heaven help us, Jar-Jar? It's impossible to pinpoint an actual lead character for the film. Back in 1977 Star Wars made it pretty simple for audiences: it's Luke Skywalker. Once the characters are established The Empire Strikes Back splits things pretty nicely betwen a Luke storyline and Han/Leia storyline. The Phantom Menace muddies the waters considerably. It could have been told from the perspective of Anakin Skywalker, a young boy who travels from the outskirts of Tatooine to the centre of the galaxy and finds a new destiny as a Jedi-to-be. Conversely it could have been told from the perspective of Obi-Wan Kenobi, a Jedi apprentice who loses his master but gains an apprentice of his own. As Lucas has failed to identify one subjective point-of-view for the audience, the entire film suffers. It just sort of meanders about without a proper focus, and compounds the problems caused by the weak narrative.

There is a tendency not to exploit the film's key assets. The poster child for this problem is Darth Maul, the demonic Sith henchman who captured everybody's attention the moment he turned up in the film's theatrical trailer. In the film itself he has almost nothing to do. He has two lightsaber duels, the first of which is oddly truncated, and that's honestly about it. Compare that to Darth Vader, who occupied the equivalent role in Star Wars. He got to capture a rebel frigate, interrogate Princess Leia, track down and kill Obi-Wan Kenobi on the Death Star and still have time to jump into a TIE fighter for the film's climax. By contrast Darth Maul has little to do other than look cool.

Lucas also fails to properly use his cast. He has some outstanding performers in the film, including Liam Neeson, Ewan McGregor, Natalie Portman, Samuel L. Jackson and Terence Stamp. The dialogue and storyline simply don't accommodate them sufficiently, and it leaves them either standing around trying to exude false gravitas or simply going through the motions visibly hoping the film shoot will end. It's particularly harsh on poor Natalie Portman, who presumably took the role in the hope of getting a role like Princess Leia and getting a weak and fairly passive substitute instead.

George Lucas was never known for his skills with dialogue. Most Star Wars fans are aware of Harrison Ford's famous complaint that 'you can type this shit, George, but you sure can't say it', but at least in terms of the original Star Wars the dialogue was to the point and with the actors - mainly Ford - given the latitude to improvise a little around the sides. After shooting The Phantom Menace Liam Neeson complained there was little latitude to improvise at all. It's a waste of talent, and the lack of charm and spontaneity really hurts the final film. Nobody is funny in this film. There doesn't even seem to be an attempt at humour outside of squeaky voice battle droids or Jar-Jar's slapstick antics.

Jar-Jar. I'm not sure I need to write much about Jar-Jar Binks, other than that he's a colossal creative misfire. It's a mystery as to just how he managed to get filtered through so many production staff members and still make it to the screen in such a curiously unwatchable form. Literally every aspect of the character misses its target, whether it's his painful slapstick, the unexpectedly weak compositing of his body into scenes (half the time characters seem to look over his should when talking to him), or his catastrophic voice by Ahmed Best which seems - I honestly think unintentionally - to emulate unpleasant stereotypes of African Americans in the early talkies. Between him, the comic Italian voice of the junk dealer Watto and the generic 'evil Asian' voices of the Nemoidians, The Phantom Menace is one big unintentional explosion of racist stereotypes.

Finally there's the thoughtless repetition of elements from earlier films. A climactic space battle to blow up a massive enemy space station. A visit to Tatooine. The entirely unnecessary presence of R2-D2 and C-3PO. The shoe-horning of C-3PO and Anakin's origins together. Jabba the Hutt. There is an argument that Lucas was intentionally echoing elements of the original Star Wars in The Phantom Menace, maybe to achieve some sort of poetic effect or sense of destiny. Whatever the motivation, it simply doesn't work. It makes The Phantom Menace feel like a half-hearted copy.

The film is, despite its reputation, not a complete disaster. Liam Neeson is great as the calm, measured Jedi Master Qui-Gon Jinn. Some of the design work is fabulous. The climactic lightsaber duel is highly enjoyable. There's one scene: Qui-Gon, Obi-Wan and Maul all get separated mid-duel by glowing energy barriers. Maul stalks back and forth impatiently like a caged animal. Qui-Gon kneels down and meditates. It's a nice momentary comparison of the two men, contrasting their personalities and fighting styles. It's a single, beautifully composed moment in an otherwise very sub-standard film.

At the time of writing The Force Awakens is out in cinemas in just over a month. It's pretty much the world's most anticipated feature film since... well actually since The Phantom Menace. That's food for thought. Fool me once, shame on you. Fool me twice...
Posted by Grant at 9:30 AM