Star Trek: The Next Generation: "Brothers" 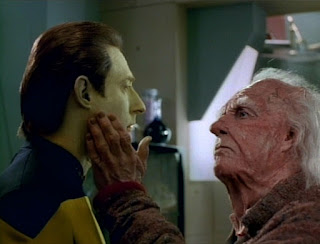 It's 8 October 1990, and time for more Star Trek: The Next Generation.

Commander Data (Brent Spiner) hijacks the Enterprise, taking it off course from an emergency medical mission and to the planet Terlina III. There he has an unexpected encounter with his presumed-dead creator Dr Noonien Soong (Brent Spiner) and his twin brother Lore (Brent Spiner).

It's actually kind of funny that a week after broadcasting the only episode of Star Trek: The Next Generation that doesn't feature Brent Spiner, Paramount broadcast an episode in which he plays three characters at the same time. If nothing else, "Brothers" is a bravura showcase of Spiner's acting, since he spends the bulk of the episode essentially talking to himself. Unfortunately with all of the focus on the technical requirements of the episode, it feels as if the script - by executive producer Rick Berman - was left badly undercooked.

So let's first focus on what's good: Brent Spiner absolutely knocks it out of the park pulling triply duty as Data, Soong and Lore. He's long-since perfected Data at this point, of course. As Soong he develops a wonderfully crafty, slightly cranking old man in the final days of his life. Given the restraints of a TV schedule he also has some fairly impressive prosthetic make-up. Data and Soong's contact is comparatively brief - a little more than half the episode - but Spiner pulls a great deal of emotion out of the arrangement, which is no small feat since one of the characters doesn't express any.

Spiner's even more effective as Lore, whose previous appearance back in Season 1 was limited to fairly one-dimensional villainy. Here the character gets to express many more levels: arrogance, certainly, but also an unexpected helplessness once he realises his creator is about to die and he's incapable of stopping it. The sudden arrival of Lore on Soong's doorstep is also the script's one genuinely clever moment: Soong activated a homing signal to force Data to come to him, not knowing that in the intervening years Lore had been discovered and reactivated, and obeyed the signal as well. The early revelation that Soong is alive feels like it should be the episode's big shock moment, so when it's shortly followed by a second it really does catch the viewer by surprise.

It's also nicely tragic for Data: in one day he manages to meet his maker, see him die, and have the one thing he's always wanted - a chip enabling him to experience emotions - snatched away by his untrustworthy brother. The real tragic part of course is that without the chip he's incapable of grieving for what he's lost.

Elsewhere the episode suffers. Early scenes of Data commandeering the Enteprise and outwitting his crewmates is effective but overlong, and doesn't quite gel well with the subsequent scenes. It robs the episode of valuable screentime that could have been devoted to Data, Soong and Lore's conversations, which ultimately feel too brief and somewhat short-changed.

The B-plot, in which one child on the Enterprise has played a prank on his brother and inadvertently infected him with killer parasites, is tedious and unnecessary. It's there to give the episode its requisite subplot, and obviously parallels Data and Lore's fractious relationship, but it's very trite and doesn't contribute any genuine comparison to Data's predicament other than the blunt statement of 'brothers forgive each other'. It is interesting that we've had two episodes in a row on brothers fighting one another. Family matters were clearly on the minds of the writer's room this season, because we're about to return to these themes several more times before Season 4 is done.

This is an episode full of squandered potential. It could have been exceptional, but instead it feels mildly tiresome. The good bits are too brief, and are compromised by the tedium of the bad bits. It leaves me entirely on the fence in regards to how to classify it: is it a good episode, or a bad one? I'm inclined to put it - just barely - in the good column. That leaves Season 4 with a quality ratio of 100 per cent, but only by the skin of its teeth.
Posted by Grant at 7:43 AM