Doctor Who: "Sleep No More" 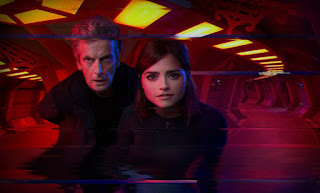 It is the 38th century. Orbiting Neptune is a space station housing the Morpheus project. Its crew has vanished. A rescue team has arrived to investigate, finding terrifying monsters marauding the decks as well as two intruders: the Doctor and Clara. It's a fairly by-the-numbers premise for Doctor Who, but one given a 21st century update that's sure to please some viewers and irritate others beyond belief. This is Doctor Who's first attempt at a found footage presentation.

Found footage is a popular technique in horror, essentially presenting a story through the purely subjective viewpoint of a character's camera. We the audience see only what the characters see, and that immediately makes whatever horrors that are stalking them more mysterious and terrifying and the atmosphere more intense. It's a technique that originated in the 1980 horror film Cannibal Holocaust, but which became a mainstream proposition with the release of The Blair Witch Project in 1999. It's since been used in films like Paranormal Activity, REC and The Chernobyl Diaries, as has expanded to a variety of genres via Project X (comedy), Cloverfield (monster movies), Chronicle (superhero movies) and Interview with the Assassin (conspiracy thriller). This week it's been applied to a new genre: the Doctor Who 'base under siege' storyline.

There's a lot to recommend about this story. First and foremost, it's a genuinely good piece of science fiction horror that concentrates on being scary over and above forming part of the ongoing narrative of the season. I'm actually fine with that: so far we've had four two-part serials so a self-contained little piece of horror is actually rather welcome. It's a nice change of pace.

Secondly it manages a couple of genuinely clever plot developments - not to mention a very surprising and particularly horrific ending. That actually came as a surprise, since the episode's writer Mark Gatiss has not - until now - written an episode I have entirely enjoyed. His first season episode "The Unquiet Dead" was probably the closest he had managed to date, along with the sixth season episode "Night Terrors". Other scripts like "The Idiot's Lantern", "The Crimson Horror" and "Cold War" were critically flawed, "Victory of the Daleks" was generally terrible and "Robots of Sherwood" is one of the worst episodes in the entire history of Doctor Who. Yet here he is, writing a genuinely great episode for once.

In a sense that's not a surprise. Gatiss is a well-regarded expert on British horror cinema, and his sketch comedy series The League of Gentlemen - co-written with Steve Pemberton, Jeremy Dyson and this episode's guest star Reece Shearsmith - often featured some genuinely effective moments of horror within it. It's interesting that the most effective episodes of Doctor Who he's written - such as they are - are the ones that allowed him to play with horror, while the least creatively successful abandoned horror altogether. "Sleep No More" sees him effectively unchained from writing Doctor Who and permitted to write 45 minutes of science fiction horror that just happens to have the Doctor and Clara in it. That's a good thing. That should happen more often.

There are drawbacks. The now-standard multi-cultural team of guest stars - seriously, how many new series episodes set in the future get based around some variant team of space soldiers? - are drawn very generically with little to set them apart beyond the actors playing them. The first half also feels remarkably straight-forward and a little ordinary, until various plot revelations begin to kick and the surprises start. There's also the simple problem that a lot of viewers don't like found footage as a narrative technique, and it's likely no amount of clever plotting is going to get them enjoy this episode.

To me the episode's best achievement is that it manages something so many found footage films fail to do: it has a logical and clever explanation for who edited together this 'found' footage, and why they bothered to do it. The episode ends with a fabulous kick in the pants for the audience, and led to me thinking something I didn't believe I'd ever think: if this is what he can do at his best, I'd quite like to see more from Mark Gatiss in the future.

Nine episodes into the season, and rather staggeringly they've all been good. The quality ratio holds firm at 100 per cent.
Posted by Grant at 3:24 PM