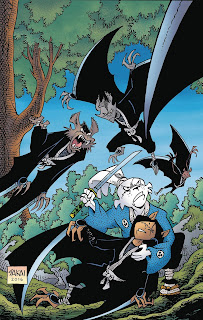 A few years ago I started posting short reviews of my weekly comic book purchases. These "Pull List" columns have been a fairly popular part of The Angriest ever since, although occasionally one will unexpectedly spike in terms of hits. It is usually because one of the writers or artists whose book was reviewed shares a link to the column. I assume that is what happened in May, because the second "Pull List" for 18 May was this month's most popular post.

What was reviewed that time around? The main review was of Gene Ha's somewhat underwhelming Mae, followed by reviews of Aquaman, Black Road, Doctor Who, Silver Surfer and Usagi Yojimbo. Of those, Usagi Yojimbo was almost certainly the best.

Putting "The Pull List" aside, the next most popular mosts last month were for the Star Trek: Deep Space Nine episode "Body Parts" (and I keep thinking people don't like Ferengi comedies) and the Ridley Scott film The Martian.

Altogether in May The Angriest reviewed nine films, 25 TV episodes, six music albums, 48 comic books, and four videogames. Thanks for reading this past month; I hope you stick around.

A full list of blog posts for May 2016 is included below.