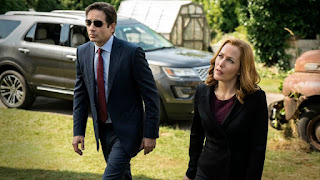 A computer programmer at a military-supported medical research company commits suicide. While investigating his death Mulder (David Duchovny) and Scully (Gillian Anderson) stumble upon what appear to be genetic experiments being undertaken on abandoned children.

There is a big narrative jump between the end of "My Struggle", the season premiere, and "Founder's Mutation". That episode ended with Mulder and Scully deciding they need to return to the FBI and the X-Files. This episode begins with them already well into a professional routine of investigating the paranormal again. The jump may irritate some viewers. Personally I was thankful that the series is moving on from its pretty dire first episode and concentrating on doing what it does best.

Based purely on the first two episodes it seems clear that this limited six-episode run is essentially a nostalgic victory lap for an old classic. "My Struggle" felt exactly like one of Chris Carter's irritating late-period exercises in conspiracy monologues. "Founder's Mutation", thankfully, could almost fit seamlessly into the series' first few years. There is a mysterious death. Mulder and Scully investigate. There are secretive government-types blocking their path. Scully performs an autopsy. Mulder argues elaborate theories about what is really going on. There are a few moments in the episode where it all feels oddly old-fashioned and quaint: The X-Files started 23 years ago, and seeing what is effectively a 1990s TV episode made anew in 2016 is a rather lovely, albeit unusual, experience.

It is not all nostalgia. For one thing the episode does briefly explore Mulder and Scully's grief over giving away their son all the way back in 2001. It does this through two unusual but effective dream sequences - one for each character - as they imagine raising William as a child. For another, the episode certainly displays a much more contemporary approach to violence. The original series never shied away from violence, but it is taken a fairly big step forward here. Seeing a man shove a letter opener through his ear canal and into his brain is something the old X-Files would have alluded to; seeing it presented on-screen was actually a slight shock.

The humour that punctuated the creepy drama in the old days is back, which is welcome. There is also a slight change in tone between Mulder and Scully. It might just be the ages of the actors returning to the roles - Duchovny in his mid-50s, Anderson in her late-40s - but there's a sense of old weariness about the characters. It works really well. They should feel like they have been running this chase for decades.

This is not a ground-breaking or exceptional episode, but writer/director Glen Wong does achieve something that Chris Carter's premiere did not. It makes me happy to see The X-Files again, and suggests the idea of bringing the characters back a full 14 years after they left was a potentially good one. Two episodes into the six, and the quality ratio sits at 50 per cent.
Posted by Grant at 7:24 AM