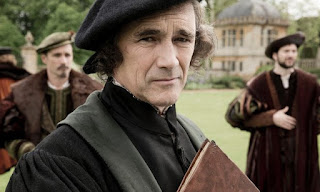 While Cardinal Wolsey (Jonathan Pryce) sits out his exile in the north, Thomas Cromwell (Mark Rylance) fights for his favour in the English court - and grows closer to King Henry VIII (Damian Lewis).

With this second episode, and with the main players now set up and well established, Wolf Hall is able to enter deeper, richer and somewhat darker territory. The story is gradually growing more complex as Cromwell is led towards jumping ship from his slavish devotion to Wolsey to the greater fortune - although riskier landscape - of following Henry VIII directly. Events gradually become more complex, as Cromwell is not only drawn into the orbit of the ambitious and aggressively combative Anne Boleyn (Claire Foy) but continues to fend off the antagonistic Duke of Norfolk (Bernard Hill) and spies sent by court rival Stephen Gardiner (Mark Gatiss).

Damian Lewis gets a lot more exposure here than in the first episode. His Henry is a much warmer representation that perhaps viewers are accustomed. He shows genuine inner conflict and turmoil over his actions and responsibilities, and perhaps lends the character a bit more sympathy than the real Henry deserves. That said there are still moments that betray a somewhat cruel character: despite regularly professing love for Wolsey, Henry has no hesitation about laughing at masques displaying the Cardinal in hell once he is dead.

Claire Foy makes a fabulous Anne Boleyn, packed full of vanity and ambition. She is the closest thing the series has presented as a fully-fledged villain, and knowledge of her ultimate fate makes her over-confident taunts and insults doubly entertaining. There is a small niggle about that approach, however, in that Boleyn is one of a few female characters within an overwhelmingly male story. Being presented in such an unlikeable fashion here does feel as if half the story is being sidelined in Cromwell's favour. A more even hand might have increased the subtlety and depth of the story even more.

Mark Rylance continues to be the dominant force of the series. His character easily scores the best lines, and Rylance delivers them with such a gentle and multi-layered characterisation. His character just gets more and more depth with every minute of screen time. There is yet more back story hinted at here too, including more indication of his soldiering experience and unlawful past in Italy as a young man. In one fascinating moment Cromwell jokes with foreign ambassador Chapuys (Mathieu Amalric) about the absurdity of the English, as if Cromwell does not consider himself an Englishman. As with so many moments in the series to date, it hangs a question mark over the character. Who is he? What are his actual motives?

There is a remarkable narrative tension at work in this series. Events are almost entirely told from the point of view of Thomas Cromwell, yet Rylance gives such a closed, ambiguous portrayal that the character himself is remarkably opaque. We can see and learn everything that he does, but his own motives and strategies remain largely unknown. It makes for potent drama. In the episode's closing moments, after Wolsey has been arrested, has died on the road, and been cruelly mocked in a court masque, the Cardinal's usher George Cavendish openly wishes for God to avenge him. 'No need to trouble God,' replies Cromwell calmly, 'I'll take it in hand.'