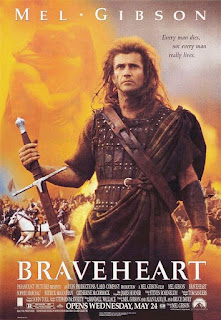 In the early 14th century Scottish patriot William Wallace (Mel Gibson) leads a growing rebellion against the tyranny of King Edward I (Patrick McGoohan) and his English army. From Stirling to Falkirk and beyond, Wallace's rise and fall is conveyed at length in this lengthy, large-scale and hilariously inaccurate historical epic from actor/director Mel Gibson.

It was difficult to avoid Braveheart back in 1995. It was the kind of massive medieval story that Hollywood simply did not make any more, and it was packed with beautiful panoramic vistas and stylised slow-motion photography. It received 10 Oscar nominations, ultimately winning five including Best Picture. In some measures the film was a throwback to older Hollywood productions. In others it was a ground-breaking film that shifted a paradigm in screen representations of violence and historical warfare. Overall it is fair to say that Braveheart achieves its aim: it is a rousing period drama with excellently staged action sequences and more than a few now-iconic scenes and moments. It is in the detail that the film begins to fray and disintegrate.

It is a great film, but far from perfect. It may have captured Hollywood's affections but was not by any stretch the best film of its year (to my mind that would be Seven). Today it is ageing remarkably well, its intrusive mid-1990s musical score notwithstanding, and definitely warrants a rewatch by those who have not seen it for some years.

Despite its considerable length (almost three hours) Braveheart does manage to hold the viewer's interest and is well constructed into a neat three-act structure. The film's two real highlights are both battles - one in Stirling and the other in Falkirk - that are still among the best I have seen presented on screen. Braveheart really did represent a groundbreaking advance in how Hollywood made medieval battle scenes. Arrows fly like they are supposed to, while swords and axes prove to be remarkably messy and haphazard. When two armies meet, there is not neat trading back-and-forth of blows. There is simply messy, horrible carnage. People lose limbs. They get stabbed and slashed. They fall around screaming. One may receive a fatal blow in the heat of the fight, but they do not often die instantly.

The Battle of Stirling is the better-produced of the two, in part because it feels so unexpectedly fresh at the time. As soon as the fighting begins James Horner's loud, somewhat obnoxious score cuts out completely and we are left with the sound of shouts, screams and steel for several minutes. There is blood everywhere: on faces, splattered across clothing, and in one shot on the camera lens. The violence and the chaos had never previously been reflected so effectively. In the years since such presentations of screen violence have become commonplace. In 1995 it felt like a mild revolution.

As a director Mel Gibson is a clear lover of slow motion and the epic emotional moment. It is an effective look but at three hours it does occasionally become a little tiresome. The film is also beautifully lit and framed, with too many outstanding shots and moments to count. It is a remarkably pretty film, given the violence.

While the action is great and the photography impressive, Braveheart does look a lot less stable once you start factoring in its script. In terms of dialogue it's remarkably solid, with screenwriter Randall Wallace giving a lot of the characters an almost Shakespearean style of poetic language. It is not particularly realistic, but he does often hit on a nice turn of phrase. In terms of plot and characterisation it has an irritating tendency to simplify. Wallace, in real-life an inherited noble who would freely negotiate with the English to avoid battle and who was known to have Scotsmen hanged who refused to fight for him, is re-imagined as a wholly honourable and singular peasant who rises up against the untrustworthy nobles. King Edward is stripped of any element of humanity or mercy - he was a fairly terrifying king in real life, but not to the extremity demonstrated here. His son, later to become Edward II, is distorted into a somewhat homophobic caricature. Young Edward's wife, Princess Isabella, is a freedom-loving independent woman willing to leak critical strategy to Wallace to help him defeat her father-in-law and who even sleeps with him and falls pregnant by him. The real Isabella was 10 years old when Wallace died, and did not even marry Edward for another three years after that.

In particular the film does demonise the English. Early in the film Edward I introduces prima noctis for the English lords in Scotland - the right to bed the bride on the first night of her marriage. There is no evidence of such a practice ever existing in reality, but Gibson includes it nonetheless. All of the English generals and lords are presented as moustache-twirling villains, sniggering and sniping their way through the film. To an extent the film works in an emotional sense, if not a historically accurate one, since much of the English acts in Scotland over the centuries genuinely were abhorrent. By treating the subject matter in such a one-dimensional fashion, however, only weakens the film and makes some parts feel almost farcical.

There is little point in running through all the ways in which Braveheart is historically inaccurate; a shorter list would simply include the few places where it gets things right. There is some outstanding material inside, generally that which is violent in nature. There are some strong performances too. Gibson gamely struggles with a Scottish accent to form a powerful lead. Patrick McGoohan is wonderfully idiosyncratic and thoughtful as the malevolent King Edward. Brendan Gleeson and David O'Hara are great in support, although in O'Hara's case the addition of the rambling eccentric Irishman Stephen never quite works properly.

There is a much better story about William Wallace to be told one day. It will feature depth, nuance, politics and a much better idea of the complex factions working around the Scottish Wars of Independence. Braveheart, to be fair, is not attempting to be that movie. As a rousing and emotional medieval epic, it does just fine. It is pretty, and thrilling, and beautifully presented, but in the end it is also just a tiny bit childlike and foolish.
Posted by Grant at 7:26 AM