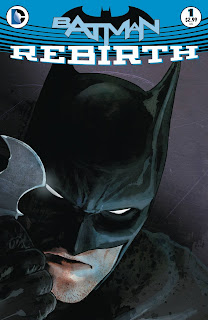 This week sees DC Comics move forward with it's "Rebirth" initiative, renumbering and relaunching most of its superhero titles with a remit to make them less grim and bleak and more like the energetic, upbeat storylines that the bulk of its fans seem to prefer. Starting that process with Batman, one of the few titles that probably should be fairly grim and dark, is possibly an odd choice.

This one-shot feels like a proper handover. It is co-written by Scott Snyder - who wrote Batman for the past five years - and Tom King - who takes over in two weeks' time. There are basically two things going on in this issue: firstly, Calendar Man is holding the city to ransom and threatening to kill thousands; secondly, We Are Robin protagonist Duke Thomas has turned up at Wayne Manor with a job offer from Batman.

Duke is a great character, who has slowly emerged from Scott Snyder's Batman run and now looks set to be another of Batman's numerous sidekicks and allies. Refreshingly, he is not being set up to become a new Robin, but rather a new identity that is hinted at but not fully explored here. It's a neat hook to drag readers into the twice-monthly book.

Calendar Man is rarely at the top of anybody's list of favourite villains, but here he gets re-imagined in the most disturbing sort of a way. He is like something out of The X-Files now: a man who grows older on an accelerated schedule as the seasons pass, and then literally climbs out of his own skin at the end of the year as an entirely new man. It is an outstanding change, and transforms a one-note gimmick villain into something really worth exploring in-depth in a future storyline.

So to a large extent it is business as usual for Batman. That's not a bad thing: Snyder's run was a wonderful one, and all that is really required from Tom King is to simply keen the momentum going and find his own voice and style as he goes. If you are looking to get back into Batman, then Rebirth is an excellent jumping-on point. (5/5)

Under the cut: reviews of Bebop and Rocksteady Destroy Everything, 4001 AD, and Satellite Falling.

Bebop and Rocksteady Destroy Everything #1

Mutated punks Bebop and Rocksteady finally star in their own comic, with the Teenage Mutant Ninja Turtles relegated to supporting status. Let's be honest: simply from the title alone you are going to know whether or not this comic is appropriate to your tastes. For me this first issue was way too dialogue heavy and failed to quite live up to its title's potential. What could have been a wonderfully silly comedy treats itself just a little bit too seriously. The art is solid, but due to the multiple artists working on it there are a few consistently issues. Hard-core Turtles fans will probably get a bit more out of it than I did. (2/5)

Rai takes the fight to New Japan alongside the Eternal Warrior and Lemur. This far future event series is not only providing futuristic versions of Valiant's key heroes, it is also providing some of the absolute best science fiction comic art I have seen in years. There is an immense late 1970s Metal Hurlant vibe to this book, with its giant chrome dragon versus spaceship fights, and its grand space opera imagery. Clayton Crain's artwork is simply magnificent. Matt Kindt is no slouch either, writing an action-packed apocalyptic storyline that feels like a well-earned climax for the monthly Rai comic book that this has followed. (4/5)

Lilly is the sole human on an enormous city-sized space station populated entirely by aliens. She is also a bounty hunter, in this case helping the city police break up a slave-powered drug trafficking ring. This issue boasts some great action, including a shoot-out and a flying car chase, all beautifully illustrated by Stephen Thompson. It takes the story from an action-based cliffhanger through to a more personal and emotive one. It is a well-honed, neat science fiction book. So far it isn't doing anything outrageously original, but what it is doing it is handling extremely well. (3/5)
Posted by Grant at 4:59 PM