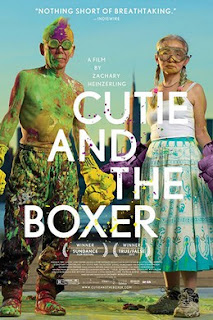 Ushio Shinohara is an 80 year-old Japanese artist living in New York. He has made his reputation on the back of a prolonged series of abstract paintings that he creates by dipping a pair of boxing gloves into paint and then furiously punching the canvas. His wife of 40 years, Noriko Shinohara, is also an artist. In this fascinating documentary, director Zachary Heinzerling follows the Shinoharas around in the lead-up to a joint exhibition of their works.

Cutie and the Boxer is a great documentary for a couple of reasons. The first is that Heinzerling has found an exceptional pair of artists upon which to focus his attention. The Shinoharas are fascinating to watch. Ushio is brash, chaotic and easily distracted. Noriko is calm, patient and visibly long-suffering against her husband's whims and self-obsessed fancies. Even before their art is explored, they are excellent documentary subjects. A couple for four decades, they have visibly and by their own admission been imperfect spouses and parents. Of course when the documentary focuses on each individual's art and artistic process, another layer of intriguing material is introduced. Their respective works are poles apart, and yet one clearly works as a reaction to the other.

Where the documentary really excels, however, is in the way it presents itself as one kind of story and then gradually shifts over time to be about something else altogether.

Noriko seems to live under Ushio's shadow. He paints, and he sculpts massive distorted motorcycles out of cardboard. He meets with museum and gallery curators, and spontaneously flies to Japan to sell some of his work. Noriko, just as much an artist as Ushio, works as his assistant, makes him dinner, and frets over rent and utility bills. There is a strong sense throughout the film that, while Noriko obviously loves her husband, she has become utterly stifled by him. Over the course of the film we watch her develop her latest works: a series of comic book-like vignettes about a pig-tailed woman named Cutie who falls in love with an alcoholic and dirt-poor artist named Bullie. It is bluntly autobiographical, and it is fascinating to watch Noriko develop the work, refine it, and ultimately exhibit it alongside Ushio's latest exhibition. It provokes an intriguing mixture of responses in her husband: he's visibly fascinated, amused and proud, but there's also a noticeable strain of bitterness weaven in between. Ushio clearly loves Noriko very much, but he also seems very comfortable being the centre of attention and is not familiar with a world in which the critics and curators are more interested in his wife.

What makes the film excel is that none of these elements are simple. Ushio is clearly something of an insensitive jerk, but he also a visibly loving and supportive husband. Noriko may complain an awful lot about Ushio's behaviour and attitude, but she clearly loves his very much. This documentary can be viewed as a film about art and artists, but really it feels like a film about long-term relationships. It is captivating to watch such a nuance, chaotic but ultimately enduring marriage between the two leads. Like the best documentaries, Cutie and the Boxer is not about a single subject matter or genre: it is a film about human behaviour.
Posted by Grant at 5:03 PM