Colditz: "The Spirit of Freedom" 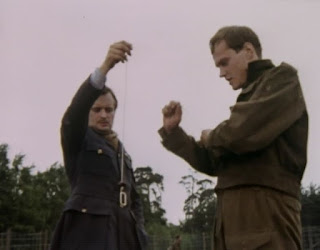 It is 23 November 1972, and time for another episode of Colditz.

New inmate Carrington (Robert Wagner) immediately distances himself from the British prisoners with his admiration for Nazi politics and unpleasant demeanour towards his fellow inmates. At the same time he pleads with the Kommandant (Bernard Hepton) for privacy to complete a book on what he sees as the inevitable German victory over Europe.

It is honestly a bit of a surprise to watch this sixth episode of Colditz and discover that Robert Wagner - future star of Hart to Hart and Austin Powers - is playing a Nazi sympathiser. It immediately makes him a grotesque and unlikeable figure. He successfully begs for favours from the Kommandant. He gets in the way of the British escape attempts. He shows utter contempt for the main characters, particularly for Flight Lieutenant Carter (David McCallum). This series has already surprised me a couple of times. Now it surprises me all over again.

Plus it does it twice in one episode. "The Spirit of Freedom" really strings the viewer along for almost its entire length before revealing that Carrington's book, which he has hand-written in his own private room, contains coded messages for the United States government. We find this out because the Gestapo have worked it out. With the game up, the episode concludes with Carrington being interrogated and assaulted in an attempt to make him give up his German sources. It is a wonderfully satisfying bait-and-switch, because given how atypical the characters have been so far it is absolutely conceivable that Carrington would be a Nazi sympathiser. Instead he has spend weeks on a long game, allowing the entire camp to despise him just to get one chance to smuggle word out to his fellow Americans.

This twist would not have worked had Robert Wagner not delivered such a wonderfully deceptive performance. He does an excellent job of being flat-out unlikeable. As a viewer I bought his character completely, and it made it all the easier for the episode to then shock me with its twist ending.

Elsewhere Player (Christopher Neame) and Carter (David McCallum) are working on an escape attempt that is both clever and believable. I have read that pretty much all of the escape attempts depicted in the series are based on real-life attempts to get out of Colditz, and that makes these sorts of scenes particularly satisfying. This is another great episode: I knew this series had a reputation for quality when I started, but it is so satisfying seeing each episode successfully manage to prove it.
Posted by Grant at 5:03 PM