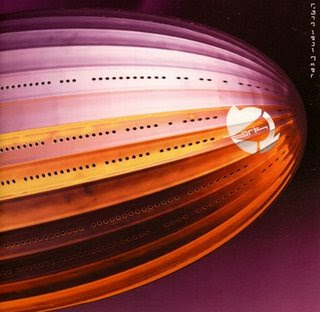 L'Arc en Ciel is a Japanese rock band. They formed back in 1991 and, a bunch of member changes notwithstanding, continue to produce music today. While they started off as a visual kei group (a sort of Japanese off-shoot of glam metal) they soon shifted over to becoming a fairly light rock/pop outfit. They are tremendously popular in Japan with more than 40 million albums sold over the past 25 years. In 1999 the band simultaneously released their sixth and seventh studio albums, Ray and Ark. I figured I would take a listen to Ark and see how it went.

The biggest issue facing L'Arc en Ciel is just how blandly inoffensive they sound. It's that sort of generic upbeat pop-rock that seems guaranteed to find a fan base without actually contributing anything fresh or new to popular music. They do have a generally Japanese flavour to their music, and that might attract some fans of Japanese popular culture, but there are better and much more interesting bands out there to sample. This album sounds about as mainstream a collection of songs as you could find, and that lets it down pretty badly.

It all begins so promisingly as well. "Forbidden Lover", the opening track, is a nice sweeping rock song with a good sense of emotion. It highlights lead singer Hyde's voice incredibly well. After that it simply seems to collapse into hopelessly generic rock. There is an unexpected big band chorus on second song "Heaven's Drive", but it is not distinctive or appealing enough to save it. "Driver's High" seems rather generic and twee as well.

"Cradle" slows things down and at least has a bit of soul to it. It's not much, but at this stage we take what we can get. Sadly things drop back down with "Dive to Blue": it's still an improvement on "Heaven's Drive" and "Driver's High", but it continues to showcase the band's main problem. They are simply not interesting enough to really grab the listener's attention. The problem continues throughout the whole album: on "Butterfly's Sleep", "What is Love" and arguably "Larva" and "Shinjitsu to Gensou to".

"Larva" at least shows a bit of effort, with some light electronica and no vocals, although in line with earlier tracks it's not particularly interesting electronica. It seems all efforts to mix the album up a little do fall rather flat.

The concluding track "Pieces (Ark Mix)" again has a bit of a sweep to it. As a closing track it at least winds things up with some strength to them, but it also seals the deal on the album in general. When it sweeps it's generically enjoyable; when it does not, it is simply generic.

There is clearly talent at work here. L'Arc en Ciel have been a successful and popular band for many years. Hyde in particular seems very talented, and has a very strong and pleasing voice somewhat reminiscent of a-Ha lead singer Morten Harket. It all seems like it could be put to much better use than this.