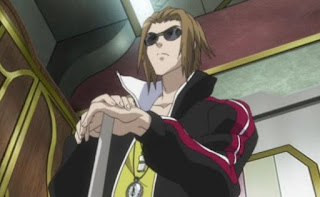 It is 19 May 2012, and time for another episode of Bodacious Space Pirates.

After finding a set of space dinghies in storage, the yacht club decide to enter the upcoming Nebula Cup. The last time the school entered the race, their club caused a passive dinghy pile-up and earned a five-year ban. Fearing a similar disaster, the championship organisers hire the Bentenmaru to observe the race and keep an eye out for trouble. Kane decides to train the girls in the club in how to pilot the dinghies, but he has some fairly unusual teaching methods.

Another serialised story begins for Bodacious Space Pirates, this time split between two simultaneous tasks: the yacht club entering the race and Marika monitoring it as captain of the Bentenmaru. She seems confident everything will work smoothly. I foresee comical mishaps in the next few episodes. At the same time, Marika's mother has learned that a criminal syndicate is targeting Marika as captain of the Bentenmaru. It looks like it won't be all laughs in the next few episodes. For this week though, it is pretty much wall-to-wall comedy.

Kane's treatment of the various yacht club members is hilarious, beginning with an over-the-top VR simulation and climaxing with a wind-surfing session at the beach. His master-stroke? Having the Bentenmaru fire into the ocean and creating a sudden tsunami. It's all utterly ridiculous, but it's knowingly so, and lifts the whole episode up.

Further story development is a little ordinary, including setting up the Bentenmaru to monitor the race and revealing that the Bisque Company is actively targeting Marika. These will obviously pay off over the next episode or two but for now seem a little too functional and dull.

By the episode's end, Natalia, Grunhilde and Ai are selected to compete in the forthcoming race, the Bentenmaru is ready to observe, and the Bisque Company are preparing to kill Marika. It's all go for the next episode. This was a broadly entertaining episode, and certainly Kane's windsurfing lesson was good enough to justify the whole episode. It leaves Bodacious Space Pirates with 14 good episodes out of 20, and a quality ratio of 70 per cent.
Posted by Grant at 7:17 AM