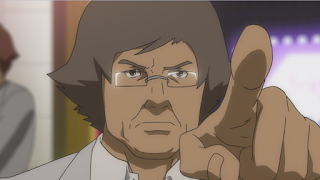 It is 14 November 2013, and time for another episode of Samurai Flamenco.

With a huge reward out for anybody willing to unmask Samurai Flamenco, Masayoshi finds himself in an increasingly desperate situation. Thankfully scientist Jun Harazuka is on the case to provide Samurai Flamenco with the superhero technology he requires.

It has close to 18 months since I last reviewed an episode of Samurai Flamenco, such is my lax attitude to watching anime. Thanks to a DVD release by Australian distributor Madman, however, it has suddenly become a lot more convenient to watch. A quick recap of the series: Masayoshi Hazama is a young male model and aspiring actor who is such a fan of Japan's Power Rangers-style superhero shows that he has put on a costume, called himself Samurai Flamenco, and has started fighting small-scale crime on the streets of Tokyo. It's a decision that has already gained him a sudden level of celebrity, a sidekick (Flamenco Girl) and now a bounty for him to be publicly unmasked. It is sort of a Japanese animated take on Mark Millar's Kick Ass, only less distastefully violent.

Masayoshi's biggest problem this episode is that the bounty on his identity has been raised to ten million yen, meaning that even when he does venture outside to rescue innocent bystanders it is inevitably a fake-out to draw him into the public and capture him. He still goes out, however, because despite the media attention and the constant attempts to tackle him to the ground and pull off his mask he is still obsessively devoted to doing good deeds. It's all rather sweet, really. He is such a charming - not to mention charmingly credulous - person.

Hidenori, the police officer who has befriended Masayoshi and who knows his secret, finds himself the target of Mari's amorous affections. At the same time Mari is training up her fellow pop starlets Mizuki and Moe to become Flamenco Ruby and Flamenco Sapphire - forming a trio of supporting vigilantes to stand behind Masayoshi. I was a little thrown by Mari's character in the previous episode, because she was becoming quite astonishingly violent. I am not sure if it has eased off here, or if I am simply becoming used to the character, but she did not seem as grating here.

Furthering the ridiculous nature of Masayoshi's superhero career is Jun, who has developed a raft of weapons and gadgets for him to use. They are all based on office stationery, since it is not illegal to carry such items in public, but does lead to scenes of Masayoshi taking down drug dealers with a measuring tape and a stapler. There is a small shift here: Samurai Flamenco used to be ridiculous and hilariously ordinary, but now he's ridiculous but to an extent his new gadgets make him a proper Batman-style superhero.

"Capture Samumenco!" is a fun and amusing episode. With four good episodes out of six so far, the series' quality ratio jumps up to 67 per cent.
Posted by Grant at 7:39 AM