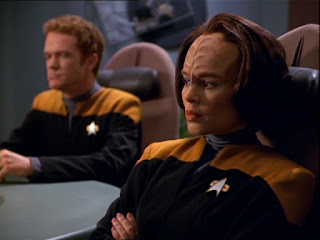 It's 23 January 1995 and time for the second episode of Star Trek: Voyager.

Voyager is thrown out of warp by a rogue singularity in space. They can see another starship trapped just beyond the event horizon, but attempts to rescue it just drag Voyager closer to the horizon itself. Meanwhile B'Elanna Torres (Roxann Dawson) struggles to control her rage when working with Starfleet officers.

"Parallax" is a generally poor episode, although to its credit there are some decent moments and scenes scattered through it. It is a 'bottle show', in that it only uses the series' regular cast plus a few supporting players, and the entire episode is shot on the standing Voyager sets. We usually get these kinds of episodes once a series has run through its budget - one wonders if the production problems that beset "Caretaker" required an immediate cost-saving exercise (lead actress Genevieve Bujold quit a few days into the shoot, necessitating reshoots with her replacement Kate Mulgrew).

There is a fairly neat idea at the episode's core: Voyager stumbles upon a trapped alien ship that is so obscured by the event horizon that they cannot see it properly nor hear their communications. Hours later, when attempts to free it have just trapped Voyager there as well, the crew discover there is no trapped starship. They are actually seeing their own ship reflected back on them somehow, backwards in time.

Sadly to make that cool idea work the episode is positively drowning in egregious Star Trek technobabble. There is much talk of singularities, warp particles and event horizons, but none of it really makes a lick of sense. At one point Lt Paris (Robert Duncan McNeill) openly admits he has no idea what the hell is going on, and rather than pause to explain the science of it the episode has Janeway simply tell him it's okay not to understand. This plot thread is absolutely packed with bad dialogue, with very simplistic conversation and emotions. Personally I cringed more than once.

This is a shame because the episode's sub-plot is rather good. It follows up on part of the series premise: members of Starfleet and members of the anti-Cardassian Maquis militia forced to cooperate on the one starship. B'Elanna Torres is fighting with the other members of the ship's engineering crew - including breaking one officer's nose. This frustrates Commander Chakotay (Robert Beltran) immensely, since he was aimed for Torres to be appointed as Voyager's chief engineer. It brings him and Janeway into conflict, and it forces Torres to properly meet and prove herself to the captain. There is great character work here, showcasing how Chakotay relates to his fellow Maquis and to Janeway, and bringing Janeway and Torres together for the first time. It feels genuinely refreshing to watch two intelligent women get together and share conversations.

B'Elanna is a pretty faulty character at this stage. She seems to have one personality trait, which is that she is the really, really angry one. Dawson gamely does her best but the scripts so far are not giving her much with which to work. Here's the thing about performing rage: the more an actor spends a scene shouting and railing, the less effective it is. Since the writers have only given B'Elanna rage, that is all there is for Dawson to perform. It gets pretty old quite quickly.

This sub-plot's resolution does not quite work. B'Elanna is appointed chief engineer, which actually makes no sense whatsoever the moment you begin thinking about it. While Janeway mentions there have been a few complaints from Voyager's Starfleet crew we do not actually get to see any of that antagonism, which seems a waste. The series is remarkably intent on doing away with Starfleet-versus-Maquis conflicts as soon as possible. By the end of the second episode it feels like such conflicts are effectively in the past. It was a great opportunity for drama, but it has been thrown away.

Bad science and some poor dialogue really pull this episode down, and the superior sub-plot simply does not do enough to counter-act the problems elsewhere. Two episodes in, and the Season 1 quality ratio drops to 50 per cent.
Posted by Grant at 4:51 PM