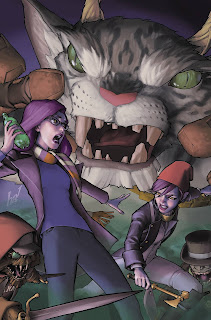 A girl named Abbie appears to run away from home, leaving her sister Mae behind. Now Abbie has returned - and is bringing the fantasy kingdom in which she has been living back along with her. This is Mae, a new fantasy comic book by writer/artist Gene Ha, that appears to be telling a portal story like The Wizard of Oz or Alice in Wonderland from the other way around.

I love a good fantasy comic, and I came to Mae with all the goodwill in the world. I really hoped it would leap out and grab me like Umbral or The Autumnlands. Instead it is sort of just there. The writing is sufficient but unexceptional. The art is okay, but not particularly great. It has a fairly low panel count per page, which is a particular annoyance of mine.

Its biggest problem is that not enough actually happens by the end of issue #1. It is difficult to properly decide whether it is worth persevering with Mae or not. Not enough has occurred to really give a proper indication of content, style or tone. Perhaps it will pick up, and perhaps it will not, but based on what Ha provides on this first issue it is impossible to tell. For me that pretty much kills it. It's a pity. If you're a fan of Ha's work by all means check it out, or if you're looking for a new fantasy comic and want to give it a chance. I'm not convinced. (2/5)

Under the cut: reviews of Aquaman, Black Road, Doctor Who: The 11th Doctor, Silver Surfer and Usagi Yojimbo.

This current volume of Aquaman comes to an end, with Aquaman finally getting some answers about the monstrous creature known as Dead Water. The end of this issue feels more like a pause in a developing story than a proper conclusion, but it's a fairly entertaining read and comes with some nice artwork by Cifuentes and Castro. Aquaman went through a fairly shaky period with Cullen Bunn as writer, and it is nice to see things setting down and working well again just in time for Aquaman Rebirth. (3/5)

Magnus the Black continues north along the Black Road with his young companion - a Cardinal's daughter - in a hunt for her father's killers. The cold, stark aesthetic of the Viking adventure really suits Garry Brown's style, as it does Dave McCaig's limited and striking colour palette. There is great character work here too, showcasing the differences between the two leads as well and showing off why they work so well together. This is a great sort of bleak medieval adventure, boasting good writing and art. (4/5)

Things take an awfully dark turn in this latest issue, with the Doctor no closer to proving his innocence of war crimes, pushing himself away from his companions, and seeking deeper and deeper into a corner with no escape from justice. Si Spurrier is juggling quite a few characters at this point - the Doctor, his companion Alice, River Song, the Squire, and Abslom Daak - and to his credit he is managing to use and highlight them all at different place. This comic works really well because it has a strong momentum, and because its storyline is complex enough that it's taking nine issues and counting to resolve without even beginning to feel boring yet. It's great stuff for any Doctor Who fan. (4/5)

The Silver Surfer has saved Earth from an attack by his own people, but now he lies critically injured - and it is up to the assembled superheroes of Earth to save him. This is a quite pleasant sort of old-fashioned superhero team-up, packed with Marvel cameos and resolving this current storyline in a tidy and simple fashion. This book continues to present a retro-styled reflection of the Marvel books of the 1970s and 1980s. It's a twee, hipsterish niche, but it fills it very well. (3/5)

A slightly unusual issue in terms of story structure, "Kazehime" first sees Usagi rescue a bat ninja during a storm, and then sees him accompany a merchant as one of his bodyguards. The two plots are, of course, linked, but it all feels like a little too much story squeezed into a single issue. With a little more character depth this could have been a more effective two-part storyline. Despite this small drawback this is as always an affective and wonderfully illustrated story of feudal Japan and anthropomorphic animals. I enjoyed it immensely. (4/5)
Posted by Grant at 7:49 AM