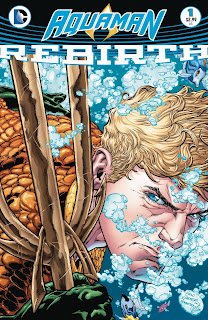 Aquaman Rebirth is a poster child for what DC Comics' Rebirth initiative should be all about. It is a great introduction to the character for new readers, and to his current status quo for lapsed ones. For new readers this is really worth checking out: Aquaman is an underrated character and his current adventures, written by Dan Abnett, have been really solid entertainment. For continuing readers, this issue continues the general story arc started at the end of the last volume. Aquaman has started to actively build diplomatic links between the surface world and Atlantis, despite suspicion among the humans and pockets of rebellion among his own subjects.

Eaton, Jimenez and Morales provide strong artwork for this issue, particularly in a stunning early splash page that could easily work as a cover. Abnett's script is well structured and engaging, particularly through the use of a mysterious narration from someone watching Aquaman's progress. This seems to be a running theme among these relaunched titles: there's a superhero getting surveilled here, another in Detective Comics, and a third in Action Comics. At the moment it seems to be different people doing the watching each time.

I think DC is taking a chance with Aquaman at the moment. Like higher profile titles such as Action Comics and Batman, Aquaman is shifting to a fortnightly schedule for the immediate future. I honestly don't know if there are enough dedicated Aquaman fans to sustain that sort of schedule - given the quality of the book these days, it certainly deserves to have them. (4/5)

Under the cut: reviews of Action Comics, Revival, and The Sheriff of Babylon

Like Detective Comics, Action Comics has received a renumbering this month back to its original system: making this issue #957. For the continuing reader of DC's Superman titles this is a great issue, pulling together leftover threads from Justice League, Action Comics and Superman: Lois & Clark and pushing the story forward in great style. The pre-New 52 Superman makes his official debut to the public after Lex Luthor attempts to usurp the Superman title. At the same time Clark Kent turns up - he should be dead - and it all climaxes with the unexpected return of an old Superman foe. Dan Jurgens returns to write this series, and it really does have an early 1990s feel to things. That's the upside: the downside is that it's all inside baseball. If you're not already reading the Superman books I'm pretty sure this new issue is going to be a little confusing and difficult with which to immediately engage. It's a shame, because this is really fun stuff. (4/5)

This series has operated on such a slow build that it's remarkable just how much finally boils over in this issue. The Cypress sisters on the run. An Amish ninja. An army of ghosts. Drug dealers. Public riots. Murder. Bodily possession. The dead continuing to walk. Now that we are nearing the conclusion of this series, everything is hitting its climax and pulling together into one massive apocalyptic finale. This really has been a great comic: part horror, part crime, all good. (4/5)

The Sheriff of Babylon #7

While Nassir is interrogated by US special ops, Sofia seeks more information about the terrorist that may have started the entire affair. This is a stunningly illustrated issue, presenting confronting material in a stark, stripped-down and perfectly paced fashion. Every month an issue of The Sheriff of Babylon is published, and every month I rave about how effectively this Iraqi crime story is told. It is a masterpiece of panel layout, and beyond that it boasts an intelligent storyline and brilliantly developed characters. If you are not reading this series you are missing out on the single best title that Vertigo has published in years. (5/5)
Posted by Grant at 4:59 PM