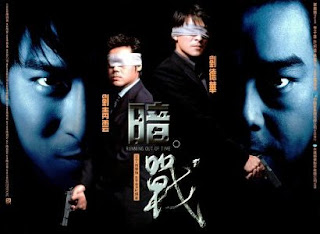 A robber (Andy Lau) holds a Hong Kong finance company at gunpoint, but when police detective Ho Sheung-Sang (Lau Ching-wan) the thief seems more interested in playing a game of cat and mouse than in getting away with his money. Over the next 72 hours the game progresses, with Ho always one step behind the thief while slowly piecing together the truth behind his motives.

1999 was a great year for Hong Kong director/producer Johnnie To. His production company Milkyway Image, which he founded three years earlier, had suffered a string of commercial and critical failures. In 1999 To's one-two punch of The Mission (shot in 18 days) and Running Out of Time (shot intermittently over two years) revived Milkyway's fortunes and re-established his career as one of Hong Kong's finest and most idiosyncratic feature film directors. They cemented a specific house style for Milkyway's crime flicks and thrillers, one that highlights small moments of character and embraces the absurd in among all of the plot twists and shoot-outs. Running Out of Time specifically also re-directed the career of co-star Andy Lau, then a popular but critically unappreciated star of romantic comedies and dramas. Under To's direction Lau stretched himself considerably, and earned a Hong Kong Film Award for Best Actor as a result.

Perhaps the biggest surprise about Running Out of Time is just how comedic it is. There is a wonderful sense of play between Andy Lau's mercurial, deeply ambivalent thief Cheung and Lau Ching-Wan's laconic, relaxed inspector Ho. They have a light banter that plays out through much of the film, which turns the whole film into a rather charming romp rather than a tense, edge-of-the-seat thriller. As director Johnnie To has always had a fairly off-kilter and unusual approach to narrative and tone, and this results in some absolutely brilliant and unexpected sequences. One in particular sees both men surviving a head-on car crash, and then racing each other while barely able to walk to reach a plot-vital briefcase. It's ridiculous stuff, but knowingly ridiculous, and it's a testament to To's direction that it comes across as well as it does.

Andy Lau's acclaim for his performance here is very well deserved. He plays Cheung with a great amount of depth and mystery, revealing multiple emotional layers but never resting long enough for any of them to be seen in full. In one striking moment Cheung hides on a minibus to avoid the police, and winds up using a young woman (Yoyo Mung) as cover. She does not alert the police, and gets off the bus with him by own volition. It is a strange yet completely believable scene, and both actors underplay the sexual frission beautifully. It's a perfect example of what makes Johnnie To's film so effective: perfectly composed, unexpected and yet wholly relatable scenes.

As Inspector Ho, Lau Ching-wan provides yet more evidence why he is Hong Kong's most underrated and reliable male actor. Ho is a great protagonist: a former SWAT commander who has taken a deliberate step back to safer territory. Nowadays he does not even carry a gun. He is a calm, cheery sort of character yet carries a dogged persistence in bringing Cheung to justice. Given Lau's success here it is not a surprise he returned two years later to play Ho in a sequel.

The other cast stand-out is Johnnie To regular Lam Suet as a credulous and fairly incompetent triad lackey. Lam has a wonderful gift for comedy, and it is exploited perfectly here. He is a near-permanent fixture in To's movies, and a welcome one every time.

Running Out of Time is a smart, funny and twisting little crime caper. While not among Johnnie To's very best films, it was at the time a bold indication on his developing style as Hong Kong's premier director of crime films and thrillers. If you have never seen To's films before I would still recommend you begin with more iconic works like The Mission, Exiled or the Election duology, but from there Running Out of Time is well worth checking out.
Posted by Grant at 5:03 PM