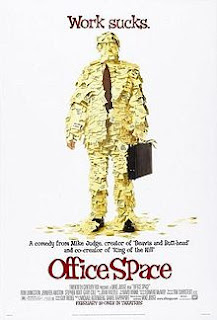 Peter Gibbons (Ron Livingston) is a bored office worker at an American technology firm. After a mishap involving a dying hypnotherapist, Peter finds himself uninterested in continuing to pointless work in his repetitive job: he still turns up, he still collects a pay cheque, but he has simply stopped doing the work. His inaction has unexpected roll-on effects for his friends Samir (Ajay Naidu) and Michael (David Herman) and new girlfriend Joanna (Jennifer Aniston).

Mike Judge's 1999 comedy Office Space was not a success upon its theatrical release, but like all great movie comedies it has since found its audience and become a widely loved cult favourite. It does this through two main methods: iconic characters and a hugely identifiable setting. Anyone who has worked in a cubicle-style office environment will find characters and situations that they recognise. More than any other film I can remember Office Space nails the tedium, petty bureaucracy and soul-destroying busy-work of the modern day office environment.

Nowhere is this more evident than in Bill Lumbergh (Gary Cole), Peter's passive-aggressive, micro-managing, petty-minded boss. Cole plays him perfectly as he haunts from one cubicle to another, coffee cup always in hand, his voice a deeply irritating slowed-down drawl as he lectures employees on things they already know, quietly bullies the staff he does not like and casually forces them to come into the office on weekends. It is so successful that Lumbergh is arguably more famous than the movie he is from; he has become an enduring Internet meme.

The film's other characters are almost as iconic, and certainly all immediately recognisable. There's the pent-up Tom Smykowski, whose irrelevant job makes him a prime target for lay-offs and knows it. There is the constantly frustrated programmer Samir, whose Indian surname seems unpronouncable by his casually racist co-workers. There is poor Michael Bolton, who unfortunately shares a name with a terrible pop musician. The weirdest character of all is Milton (Stephen Root), a mumbling, incompetent office worker who does not appear to have an actual job and who remains perpetually concerned about the well-being of his stapler. The Milton character pre-dates the film, and was the focus of a short series of animated shorts by Mike Judge. That may explain why he seems so exaggerated a character; it is a smart creative choice by Judge to feature him, but only on the sidelines. A little of Milton goes a very long way.

Jennifer Aniston is a real surprise, playing key love interest Joanna in a comparatively naturalistic fashion compared to her co-stars. It is an approach that works, and allows her to create a normal, likeable hook from which the viewer can better appreciate the more unusual and outlandish characters. Outside of her famous role of Rachel Green in Friends Aniston has starred in an awful lot of romantic comedies. Office Space is by far the best movie comedy she has done.