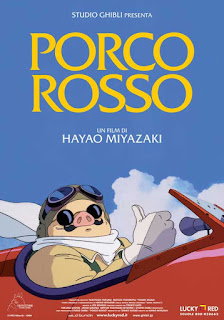 Between the First and Second World Wars, the Adriatic Sea is packed with travellers, pirates and bounty hunters, all flying various seaplanes. The most famous of them all is Marco Pagot, a war veteran with the face of a pig, who is known across the sea as the legendary "Porco Rosso".

Porco Rosso is the sixth animated feature film by Japan's most popular and acclaimed animator Hayao Miyazaki. It is based on a three-part manga he wrote and illustrated some years earlier. In Japan it was by some distance the highest-grossing feature film of 1992.

In terms of Miyazaki's overall career Porco Rosso sits comfortably between the family-friendly adventure of Kiki's Delivery Service and the more mature fantasy of Princess Mononoke. Tonally it lies somewhere in the middle of the two: there is plenty of broad comedy for a younger audience, but there's also some more mature themes and character relationships as well. It is a nice combination, which makes this a particularly great film from this legendary filmmaker.

The plot rambles along amiably: Miyazaki typically makes up his storylines as he goes along, which seems to work for him while simultaneously throwing every writer in the world into a seething fit of jealousy at how easy he makes that look. The story essentially goes like this: Porco is a pig-faced fighter pilot who hangs out at the island hotel of the beautiful Gina - a former love he has romantically abandoned since turning into a pig. A brash American pilot named Curtis, upon discovering Gina is close to Porco, takes it upon himself to hunt Porco down and kill him in a dogfight. He unknowingly fails, and Porco takes his damaged plane to Milan for repairs. It is redesigned and fixed by Fio, a talented teenage girl and granddaughter to Porco's usual mechanic. Together Porco and Fio set back off over the sea so Porco can have a rematch with Curtis.

The plot is amiable enough, but where the film excels is in its characters and its attention to detail. The characters are marvellous, particularly the warm relationship between Porco and Fio. She's clearly slightly smitten with him, like teenagers sometimes are, and he is visibly both aware of it and not willing to put her under any illusions. It's a much more balanced and three-dimensional friendship than one normally sees in an animated film - even one from Japan, which generally offers a bit more complexity than the standard anyway. Porco and Curtis' rivalry is played for laughs rather than drama, which helps to lighten the film considerably. Their climactic rematch contains some truly excellent comedic moments and gags. Porco's romantic relationship with Gina sits underneath the whole film, largely understated but regularly present.

Like many of Miyazaki's works there is no real 'bad guy'. There are antagonists for sure, notably Curtis and also a raucous gang of sea pirates, but when push comes to shove and the Italian air force arrives they are all on the same side when it counts.

Miyazaki's attention to detail is remarkable. He has always been a fan of planes and flight, and here he gets to indulge in featuring a wide array of 1920s seaplanes. Each is perfectly composed and animated, all by hand. They look remarkable. The architecture of Gina's island, and of Milan, is similarly beautiful to watch. It is all so remarkably fluid, and seemingly effortless - something Porco Rosso shares with all of Miyazaki's films.

To an extent this is one of Miyazaki's more overlooked films, wedged between one of his all-time favourites and one of his most widely promoted. It would be a shame to disregard it or take it for granted. This is a beautiful, warm, funny and quite touching movie. It never gets old no matter how many times I watch it.
Posted by Grant at 9:30 AM