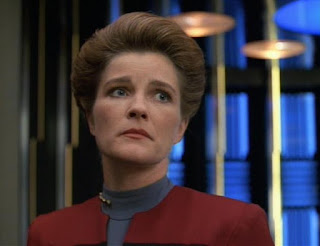 It is 20 February 1995, and time for another episode of Star Trek: Voyager.

Voyager encounters a wormhole that may lead back to the Alpha Quadrant, only to discover it is much too small for the vessel to enter. Instead a communication line is established - while Voyager may not make it back, at least Starfleet and the crew's families can be informed that they are alive. Contact is established with a starship on the other side - only it is Romulan.

Throughout the Next Generation era of Star Trek there was a growing unwillingness to shift the franchise too far away from safe territory. The same alien races tended to appear over and over, and even in situations where these aliens would not logically turn up, writing gymnastics somehow managed to make it happen anyway. "Eye of the Needle" is a case in point: only six episodes into the first season, set in a completely uncharted area of the galaxy, and the Romulans are turning up. Thankfully the episode itself more than makes up for it: this is the best episode of Voyager so far.

It is obvious from the outset that the wormhole is not going to get Voyager back home. A return to the Alpha Quadrant was clearly an event reserved for a series finale, and so any attempt to return home before the last episode of Season 7 was guaranteed from the outset to end in failure. In effect this means that each subsequent chance presented in the series was going to have less emotional impact than the one before it. This is mind it is a surprise to see the production team go into this kind of storyline so early into the series.

So what saves it? Good writing, nice character work, and a short string of genuinely clever twists. It is obvious that the plans to return to the Alpha Quadrant will fail; the audience does not, however, know why the plans will fail. The first hurdle is that the wormhole is too small, resulting in sudden disappointment. Hopes are raised when a probe gets jammed inside the wormhole, allowing for a communication to be transmitted on the other side. Those hopes fall when it turns out the wormhole exits into Romulan space, and the only person to talk to is a potential enemy. Hopes rise a third time when Torres (Roxann Biggs-Dawson) discovers a way to beam someone via the wormhole from one ship to the other. The Romulan captain (Vaughn Armstrong) transports to Voyager, and everything looks set to get the crew home. Then a bombshell hits: the wormhole leads not simply through space but also time. Voyager have been communicating with a man 20 years in the past. There is one final consolation: the Romulan captain agrees to take away messages from the crew to their families, and deliver them 20 years into his future. Once he has departed, Tuvok (Tim Russ) drops one last bitter disappointment. The Romulan captain, in Voyager's timeline, has been dead for four years. The messages almost certainly never arrived.

This emotional see-saw effect is excellent, and it is particularly effective that the episode ends on a genuine downer. Hopes were raised and dashed, and now the crew looks forward to potentially decades of travel back home instead. It's unusual for a Star Trek episode to conclude this morosely, and it makes "Eye of the Needle" an absolute stand-out. Kate Mulgrew is particularly strong here, giving a beautiful performance with a lot of heart and sensitivity. It is a shame the series has not given her strong material that often. Her look when she learns the Romulan captain has died is positively heartbreaking.

The episode's subplot is just as effective, exploring the Doctor's (Robert Picardo) growing frustration at being treated as a tool by the crew and not as a sentient person. He is dismissed and ignored by crew members, and people regularly turn him on and off against his wishes. It is a nice series of scenes, culminating in the realisation that he will have to adjust to becoming something more than an emergency program. The Doctor is the series' most interesting character by far, and Picardo plays his very well.

Another good episode - and this one really is the series' first all-out gem - brings the quality ratio up to 50 per cent. Hopefully future episodes will continue to improve that ratio as they go. From memory - it's been two decades since I've seen most of these - I am not sure that they do.
Posted by Grant at 7:28 AM